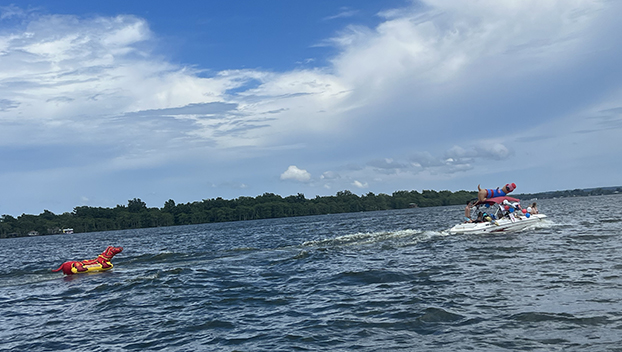 VIDALIA, La. — Lake St. John, a great place to connect with people on the lake, is not so great a place for connecting to the internet. Concordia Parish officials are hoping to change that.

“I live on Lake St. John, been there since 1946, and we haven’t had cell service there since ’46,” William Coleman said jokingly. “I’m also president of Lake St. John Waterworks and would like to preface my remarks by thanking the police jury. We could not operate without you all behind us.”

Coleman credited local, state and federal leaders for aiding the development of future infrastructure at Lake St. John, including overlay on Highway 568, a new water plant that costs nearly $2 million and now the cellphone tower to improve internet service for residents around the lake.

Coleman said none of the politicians he contacted over 30 years could help with Highway 568 until Rep. Travis Johnson III, a Ferriday native, came into office.

“When he got here, he jumped on it like a duck on a June bug,” Coleman said. “He got with Julia Letlow and within a week, it was done. He emailed me the itinerary for next year and showed me that 568 is getting overlay.”

“We needed that bad, but what we need more than anything else is communication,” Coleman said. “Mr. Guy Stout … and Jeff Couch were kind enough to put a repeater on the water tower at Lake St. John to get us as good of internet as we got. It’s good, but there are so many of us on it that at high-use times it’s slow. It breaks down because it’s a repeater coming out of Ferriday coming out of Mobile Alabama, but it’s better than what we have had.”

Stout owns numerous cell towers throughout the southeast and owns the property behind the ice house near Spokane Resort, where he plans to construct the tower, Coleman said.

“He told me Friday that I can say the tower is going up,” he said, adding a surveyor would soon be coming to the property to survey the exact location of the tower.

Before construction, however, a lot of paperwork needs to be done that requires support from the police jury, Colman said.

“There might be a toad frog that lives out there somewhere,” he said. “Just like with the water plant, you have to do lots of paperwork.”

He added it might be March or April before equipment can be put on the tower but work would begin as soon as possible.