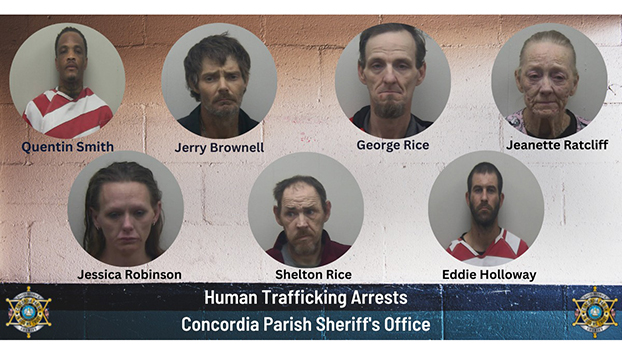 VIDALIA, La. — Concordia Parish Sheriff’s Office’s continued probe into what is believed to be a human trafficking network in the Miss-Lou has yielded its seventh arrest.

Shelton Rice, 50, of 1210 Plum St., Vidalia, was booked at the Concordia Parish Jail on Friday with warrants for cruelty to juveniles and human trafficking.

All persons are presumed innocent until proven guilty, the sheriff’s office added.

On October 24, CPSO began an investigation into reports of an adult subject who had possibly engaged in illegal activity with multiple minors over a period of time.

Based on evidence recovered during the initial investigation, a suspect was identified along with multiple juvenile victims. Detectives obtained evidence of juveniles being supplied with narcotic substances such as methamphetamine and fentanyl and being transported to locations in both Concordia Parish and Adams County, where adults engaged in sexual activity with them.

As the investigation progressed, additional suspects were identified through interviews and digital evidence connecting numerous individuals involved in the activity.

Based on the evidence, investigators believe minors in the custody of adults were introduced to someone selling narcotics by their guardians and were provided with narcotics by both those who were illegally selling the drugs and the guardians, who engaged in the use with them.

As a result, the minors were subjected to sexual abuse by adults while under the influence of substances and the adults with custody of the minors did nothing to prevent it. They instead filmed it.

Evidence was also obtained that revealed someone offering another the opportunity to engage in sex with a sleeping minor in return for methamphetamine. Numerous adult victims were also identified that were exploited for sexual purposes in return for narcotics, one of which attempted numerous times to escape such activity over the course of several years.

“CPSO has worked closely with the Adams County Sheriff’s Office and additional charges are likely regarding suspects in Mississippi,” law officials said. “It is often perceived that human trafficking consists only of individuals being kidnapped and transported to another country, where they are then sold into slavery.  However, that is not always the case. Louisiana law defines it as any person who is exploited for sexual activity by another who gains anything of value from it by many different means.

“The activity is often linked to the narcotics trade involving both juveniles and adult victims and is in no way restricted to larger metropolitan areas. This investigation was the direct result of a citizen who simply overheard a conversation involving the activity who contacted the Sheriff’s Office immediately. Sheriff (David) Hedrick would like the public to remember, if you see something, say something, no matter how small you think it may be.”