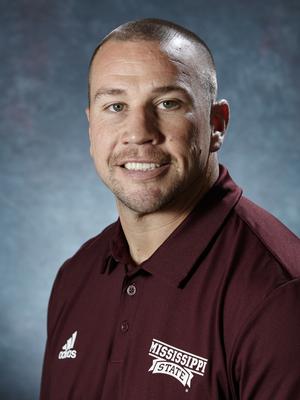 STARKVILLE ­­– Zach Arnett, a proven leader for the Mississippi State football program throughout his tenure in Starkville, has been named the Bulldogs’ 35th head football coach, interim Director of Athletics Bracky Brett and President Mark Keenum announced on Thursday morning.

Arnett, considered a rising star in the coaching profession and regarded as one of the top defensive minds in college football, has served as MSU’s defensive coordinator for the last three seasons.

“Our football program has dealt with a stunning blow at the untimely passing of Coach Mike Leach,” said MSU President Mark E. Keenum. “It is imperative that we bring stability and continuity to our team and our coaching staff as we move forward from this tragic event. I have tremendous confidence in Zach Arnett‘s leadership and believe he is uniquely positioned to continue the progress Coach Leach brought to our program. He brings great drive and intensity to the task.”

Arnett agreed to a four-year contract – the maximum length allowed under Mississippi’s state law – that will pay $3 million annually, plus performance-based incentives.

“This is an incredibly difficult time for everyone at Mississippi State, especially for our football student-athletes and staff,” Brett said. “As we continue to help each individual work through the sorrow that they are feeling following the passing of Coach Leach, we felt that it was crucial to provide the team with a proven leader who will be able to help them continue to navigate through these trying times and into the future. That leader is Zach Arnett. He has been a pillar of support for everyone within the program through this difficult time and during his time in Starkville. He is a tremendous, young coach who understands the culture of Mississippi State and will continue to elevate it in this new role.”

While in Starkville, Arnett has run a signature 3-3-5 scheme and has boasted a reputation for aggressive play, heavy blitzing and a commitment to physicality.

“I’m honored that Bracky Brett and Dr. Keenum have the faith in me to lead our program,” Arnett said. “This is an extremely challenging time for both me and everyone associated with Mississippi State football. No one can ever replace Coach Leach and the impact he had on MSU and all of college football. This team is full of strong, resilient young men and we are committed to continuing to build on the foundation Coach Leach laid and continue to honor his legacy.”

Arnett’s attacking style of defense has proven to be a hallmark of recent MSU teams as the Bulldogs have ranked in the top five of the SEC in his three seasons in total defense, rushing defense and takeaways.

During the 2022 season, the Mississippi State defense boasted two of the top tacklers in the SEC. Nathaniel Watson led the SEC with 108 total tackles and Jett Johnson tied for third in the league with 103 tackles, making Mississippi State the only program in the league featuring two players with more than 100 tackles on the season.

Cornerback Emmanuel Forbes proved to be one of the top cornerbacks in the entire nation, earning numerous All-America honors after closing out the regular season ranked second nationally with six interceptions, while he also broke the FBS career record for pick-sixes (6) after adding three this season. His 174 interception return yards in 2022 also leads the nation.

In 2021, the Bulldogs ranked third in total defense (352.3) and led the SEC in fewest first downs allowed (219), while also leading the league at getting off the field as they allowed the second fewest total plays on the year (807).

Arnett is a two-time nominee for the Broyles Award (2020 and 2021), which is given to the nation’s top assistant coach, and a member of the prestigious AFCA 35 Under 35 Coaches Leadership Institute (2020).

Prior to MSU, Arnett spent the previous nine seasons at San Diego State under the mentorship of one of the game’s great defensive minds in former Aztecs head coach Rocky Long. His coaching career began as a defensive graduate assistant in 2011 before being elevated to linebackers coach in 2014 and promoted to defensive coordinator in 2018.

Over that span, the Aztecs posted a combined 81-38 (.681) record, won three Mountain West Conference championships, and played in a bowl game every year – winning four of them. He coached seven all-conference linebackers, including Kyahva Tezino, who was an All-Mountain West first team selection in 2018 and 2019. Arnett also guided the career of All-American and three-time All-Mountain West choice Calvin Munson, who finished sixth in SDSU history with 301 tackles.

Prior to coaching, Arnett played linebacker for four seasons (2005-08) at the University of New Mexico. He logged 200 career tackles and tied for the FBS lead with six forced fumbles as a senior captain in 2008. Arnett helped the Lobos to 25 wins as a student-athlete and consecutive bowl appearances in 2006 and 2007. He was a four-time academic all-conference selection and earned 2008 CoSIDA Academic All-America first team honors.

A native of Albuquerque, New Mexico, Arnett attended La Cueva High School, where he was a two-sport athlete in football and baseball. Arnett was originally signed to play baseball at New Mexico before earning a football scholarship the summer prior to the start of his true freshman season.

Arnett graduated from New Mexico in 2009 with a bachelor’s degree in history and minor in political science. He and his wife, Emily, have one son, Case, and a daughter, Collins.