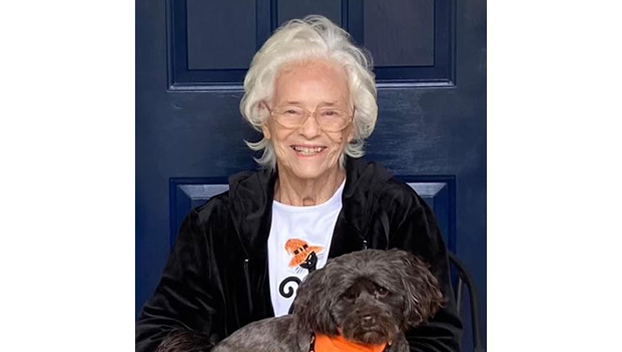 Mrs. Edna was a trailblazer.  As the eldest child of a sharecropper, she grew up during the Great Depression years in abject poverty, working long days in cotton fields. She spoke of missing the first six weeks of school each year, since the cotton crop had to be harvested.  Those early hard years instilled an incredible sense of determination and sheer willpower to overcome any obstacles, and to see that her own children would never have to struggle as she did.

When she met the love of her life, Freddie, on a blind date, she put her aspirations on hold, and together, they went on to build a family which would become the center of their lives.  When her youngest child started kindergarten, she enrolled in college to pursue her dream of becoming a teacher. She started in Special Education, and later taught English literature and Spanish.  To better learn Spanish, she spent six weeks one summer with a family in Mexico in their home (with no air conditioning).  She made quite a mark on her students, who to this day, describe the positive influence she had on their lives. So many have stated that she would tell them that they could do anything they set their minds to — after all, she knew all too well herself.  At times, they challenged her:  She told of a time that she would find dead snakes in her mailbox.  She responded by giving them tests every day until the instigator was eventually revealed by his classmates!

As for her own family, there was never any doubt in each of her children’s minds that pursuing higher education was optional.  At one point, there were three family members attending college at the same time on a factory worker’s pay.  Even so, they never knew anything but the richest of childhoods, growing up in the hills of Sicily Island, loving life and each other.

Once her children were grown, Mrs. Edna pursued her own interests.  She loved reading, cooking, sewing, quilting, gardening, traveling, and nurturing relationships with her extended family and friends.  She gathered information on her ancestry and compiled two separate family history books on her maternal and paternal families.  She took classes to become a master gardener and then planted a public garden in town, the fruits of which were offered for free to anyone in need.  She attended a quilting class and made a baby quilt as her project.  She traveled the world and soaked in the culture. (A favorite photo is of her on a camel.)  Even in her final months, when traveling became very difficult, she would still say that her middle name was “Go,” so every effort was made to get her out of the house on various adventures–the height of which was attending her granddaughter Emma’s graduation from LSU.

Mrs. Edna was a devout Christian who truly tried to live her faith.  She loved her church family and spent years as the teacher of the adult women’s Sunday School class.  She would spend hours studying the lesson and researching the internet for supporting material for her class. Her class published a cookbook, the proceeds of which were used to help pay for the church’s gymnasium. Her beautiful prayers could make you cry—we will miss her heartfelt prayers to her Lord and Savior.

This strong, beautiful Christian lady left a positive mark on this world.  However, the center of her world was always her family. Above all else, she delighted in her children and grandchildren.  In her own words, “Treasure your family. Nothing is more important.”