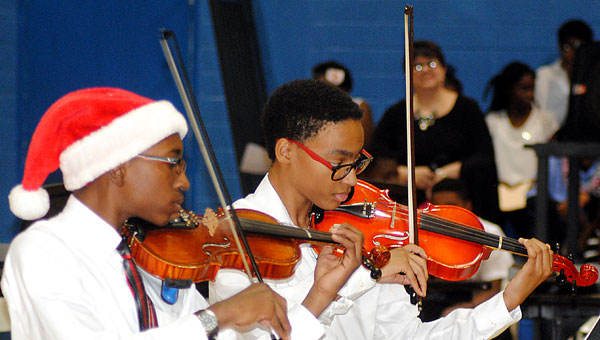 NATCHEZ — During a Friday meeting, the Natchez Adams School District Board of Trustees voted unanimously to begin contract negotiations with two different consultants to establish a true performing arts program in the district.

Natchez High Athletic and Programs Director Alphaka Moore introduced Zachary Harris as a potential consultant for the junior high and high school band program and Gary McCullum as a choir, music and Performing Arts consultant to the Board of Trustees during its meeting last month.

The cost and length of the contracts are still being worked out, said Superintendent Fred Butcher after Friday’s meeting, adding the board’s decision is a step forward in the process.

School officials did say, however, that a School for the Arts is one of their top goals for Elementary and Secondary School Emergency Relief (ESSER) funds allocated to the district.

Harris teaches music at William Carey University and works as a consultant for bands throughout the state. He would be able to assist and mentor the district’s young band director, Jamien McCallister, Moore said at last month’s meeting.

McCullum is the director of the performing arts programs at East Marion Schools, building the program from the ground up and turning it into a model program for the state, he told school officials in November.

“After the Christmas program, so many people came to me and said how great the music was and how important it was to have more music from the public schools,” board member Diane Bunch said. “To everyone that has come to me, I have said that is one of our top priorities to use ESSER funds for. When they saw the violins and they see these kids playing at the Christmas programs, it is just wonderful. I can’t stress enough how that brings the community together.”

In other matters during Friday’s meeting, school officials agreed to send a letter to the City of Natchez declining a federal COPS grant opportunity from the Department of Justice that could’ve hired up to seven school resource officers from the Natchez Police Department to work at NASD schools.

Natchez schools would have been awarded $768,319 from the grant, the highest award of three in the state.

Other awards went to Holmes County Consolidated School District for $125,000 and the City of Picayune for $124,150.

“If, in fact, we are required to pay the 25 percent match, which is $287,000, it would have to come out of our general fund as opposed to the ESSER fund, which cannot be used as a match. It would put us in a situation where we’d have to locate those funds,” said Board Vice President Philip West. “We appreciate them submitting the proposal to partner with us in order to get something done … but at this particular point it’s just not feasible.”

The board also moved its Tuesday, Dec. 20, regular meeting up to 9 a.m. No other actions were taken.