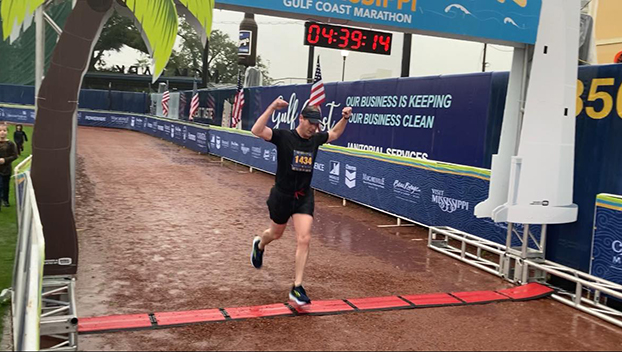 BILOXI — Forrest A. Johnson III’s 10 year journey, 1,310.94 miles of racing and 50 marathons in 50 states came to an end last Sunday at the Mississippi Gulf Coast marathon.

He originally set off to run a marathon in each state in 2012 after his buddies challenged him to run a half-marathon and then a full marathon.

It kind of progressed to where he had a chance to run one in each of the 50 states, including a bonus one in Louisiana. Johnson said about halfway through his 50 marathons in 50 states he realized he had not run in Mississippi yet and decided to save it for last. He ran in the Boston Marathon in April 2022.

Sunday’s race was no record setting race by any means. He finished in 4 hours, 39 minutes and 17 seconds with his parents, brother Andrew, wife Jillie and daughter Mary Blaire were there cheering him on at the finish line. Johnson said he was just glad to finish the race as course conditions were challenging. Hard driving rain soaked him the final six miles but he kept pushing through.

“I was a little slower than normal but I was going to finish no matter what,” Johnson said. “When your shoes and socks get water logged it can make it difficult. You just have to make the most of it. They all stood out in the rain to cheer me on at the end. It was exciting.”

He was welcomed home Tuesday with a reception at the Shields Town House in Natchez. Mayor Dan Gibson presented him a proclamation on behalf of the city of Natchez. Johnson said he had a great time celebrating.

Reflecting on his journey, he said there were several races which stood out to him. The first marathon proved he could actually run the distance, Boston Marathon was a bucket list event and the New York Marathon was also a special event, he ran it in 2019.

His training regime consisted of four days of running with three low to medium distance runs and then a long run over the weekend and three days of rest. He also did cross training too. His diet was not restrictive although he is pretty intentional about eating a balanced diet. A few weeks before a marathon, he really tries to be careful about how he is fueling his body.

Johnson said he learned a lot from his time running.

“You learn a lot about yourself and your resilience. You can always go further than you think. It inspires a lot of confidence to know you can go out and do something,” Johnson said. “No matter what, you can always preserve. You just have to learn to trust yourself and have grit. You need faith to overcome obstacles.”

Amazingly, he did not suffer any major injuries over the course of the marathon challenge other than a few sore muscles or joints. Johnson said it was fortunate to not suffer any injuries considering the amount of miles he has logged over the years.

Nearly a week after completing his decade long race, Johnson is taking a moment to think about what is next for him. Currently, he does not plan to do anything crazy yet but does plan to run another marathon.

“I won’t have the same mission but I look forward to continuing to run,” Johnson said. “I always enjoyed the time to gather my thoughts while running. I’m not sure what the next big goal will be. It has been a remarkable journey. It is surreal. It is a goal which feels so big you wonder if you will ever get there. I have seen neat places which I might not have seen otherwise. I learned a lot.”