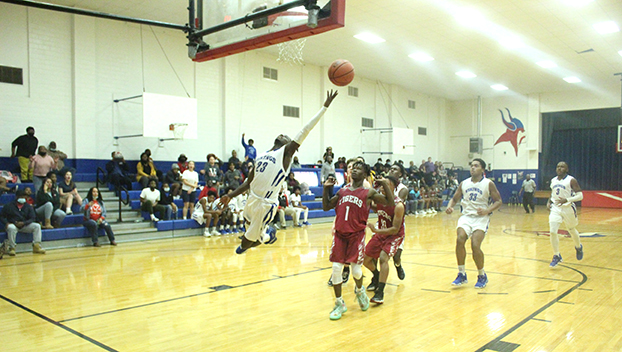 Christopher Brooks, a senior point guard at Vidalia, led the team in 12 points to help his basketball team rally in the fourth quarter against Caldwell Parish. Vidalia won 51-48 over the Spartans Tuesday night. (File Photo)

Vidalia played solid defense in the first quarter, but its offense struggled at times and that led to the Vikings being up just 10-6 at the end of the quarter. Caldwell Parish closed the gap in the second quarter by outscoring Vidalia 14-12 to make it a 22-20 game in the Vikings’ favor at halftime.

The Spartans appeared to take control of the game after a solid performance on both ends of the court in the third quarter. They put up 16 points while holding the Vikings to just 11 points to give the visitors a 36-33 advantage.

However, the Vikings would respond in a big way in the fourth quarter as they scored 18 points while the Spartans managed just 12 points.

Vidalia improved to 4-4 overall. The Vikings, as well as the Lady Vikings, were scheduled to host Franklin Parish High School on Friday night, but the dangerously cold weather will likely leave those games either postponed to another date or canceled altogether.