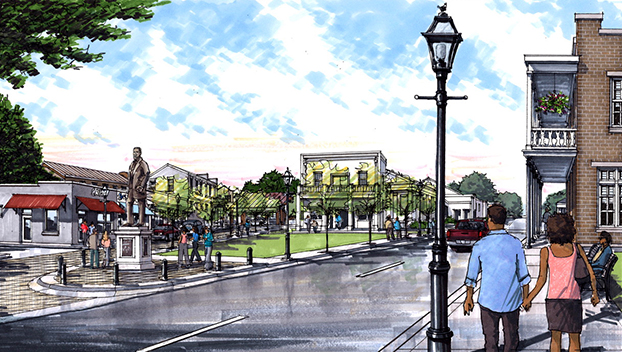 The City of Natchez plans to develop the Martin Luther King Jr. Triangle area into Hiram Revels Plaza. A rendering of the plaza is pictured.

NATCHEZ — Immediately following the end of a special meeting of the Mayor and Board of Aldermen Wednesday morning, Natchez Mayor Dan Gibson signed two contracts with engineering firm Neel-Schaffer.

One contract is for the design of Revels Plaza, more commonly known as the MLK Triangle at the intersection of St. Catherine Street and Dr. MLK Drive.

The area is part of the city’s master plan and will be developed into a park, which will include a statue of Hiram Rhodes Revels. Revels was a pastor at Zion Chapel in Natchez and represented Mississippi as a U.S. Senator, the first African American to serve in Congress.

The second contract hires Neel-Schaffer at a cost of $30,000 to prepare applications for RAISE grant funds from the Department of Transportation for the purpose of developing Revels Plaza, the U.S. Colored Troops Monument, as well as a Forks to Freedom Corridor, beginning at the flyover at D’Evereux Drive and Seargent S. Prentiss Drive, continuing to St. Catherine Street, encompassing the Forks of the Roads and the Angeletti House on St. Catherine Street, the historic African American business community and continuing to the Natchez bluff.

“We are so pleased that the board at an earlier meeting took action unanimously to pursue a RAISE grant application,” Gibson said as he signed the documents.

During its meeting on Wednesday morning, which lasted about a half an hour, aldermen took care of some routine business, such as approving a temporary pay increase for a member of the Natchez Police Department staff, who will be hired for one year to provide training to other officers.

Gibson gave a report on his recent trip to Washington, D.C., where he met with officials at the African American Civil War Museum, spent time with the French Ambassador to the United States, Philippe Etienne, and staffers of Congressmen Bennie Thompson.

“I do not take for granted that I represent the oldest city on the Mississippi River,” he said.

The meeting ended with an executive session to consider a prospective lease agreement on a city-owned property, Auburn. No information was released about the potential lease. No action was taken after the closed-door discussion.

Aldermen are allowed to go into executive session to discuss potential litigation, the sale or lease of real estate and personnel matters.