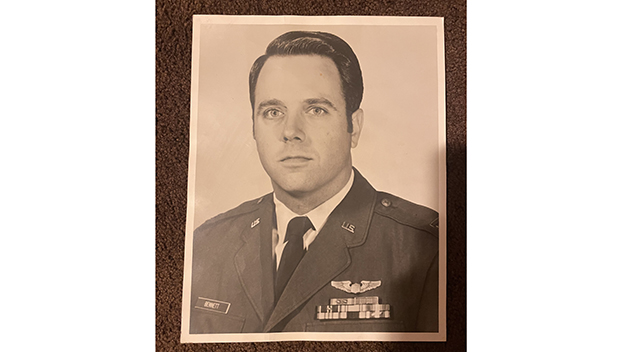 NATCHEZ — When Jane Bennett Skelton speaks of her older brother, she still refers to him in the present tense, even though no one has seen him in 50 years.

Thursday, Dec. 22, is the 80th birthday of Thomas Waring Bennett Jr., of Natchez, she said.

“This date is also the date he was shot down in North Vietnam,” which was 50 years ago today, she said.

“He’s just a wonderful brother, a wonderful person,” she said, switching to the past tense only to talk about the days before he joined the U.S. Air Force. He grew up in a family with six children in a house on South Commerce Street in Natchez, recalled Skelton, who now lives in Greenville. He is the second oldest sibling and Skelton is the third, she said.

She described him as a 6 foot, 4 inches tall, fun-loving, Christian man and “the best big brother any sister could ask for” who always “got along with everybody.”

“I had that closeness with him even though we were almost five years apart,” she said.

He was a 1961 graduate of Natchez High School when it was in the building today known as Margaret Martin Performing Arts Center.

“He was an Eagle Scout, as was my father,” Skelton said.

Also like his father, Bennett—affectionately known as “Buddy”—served his country.

He graduated from the University of Southern Mississippi and wanted to be a Presbyterian minister. He studied a year in Atlanta at the Presbyterian Theological Seminary before he changed course and enlisted in the Air Force, Skelton said.

“Our father was in the army and he wanted to be a pilot,” Skelton said, later adding, “It was in his DNA.”

Two members of the Bennett family were involved in airplane crashes on active duty.

Buddy’s uncle was in a plane that went down in the ocean somewhere outside of Puerto Rico, where he was stationed, Skelton said.

On Dec. 22, 1972—Buddy’s 30th birthday—a B52 carrying Buddy and five others was gunned down over Hanoi, North Vietnam.

It’s believed that a missile shot off the left wing of the plane, forcing the crew to eject.

Skelton said she knows her brother was alive at the time.

Of the six on the plane, three were repatriated months later in a general prisoner release in 1973. In June 1989, it was reported that the Vietnamese discovered the remains of two more men who were finally sent home to be buried 17 years later. How and when they died remains a mystery. Another mystery—what happened to Buddy?

Officially, he was promoted to major before being declared dead on October 9, 1980. His remains have never been found or returned to the United States.

“The government has done three different searches on Buddy’s crash site and they haven’t found one tooth — nothing,” Skelton said. “They say time heals all wounds but that is not correct. It’s awful not knowing.”

Have they mourned Buddy? Skelton said it depends on whom you ask.

“Momma believed he was gone and Daddy and I have always believed he’s still there,” she said. “I’ve just always had a feeling.”

On his birthday and the 50th anniversary of his disappearance, Skelton hopes to keep her brother’s memory alive, even if he is now with her parents in heaven.
“Only God knows. Momma and Daddy know now, but none of us siblings know,” she said.