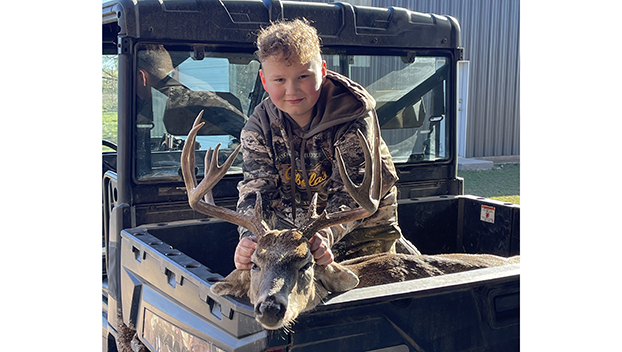 Brody Bequette killed this buck Saturday morning after hunting for three days. His trip was more than the final harvest and included seeing and stalking elk and fellowship with people at the Lawns, Texas ranch. (Submitted Photo)

NATCHEZ — ACCS student Brody BeQuette was first diagnosed with stage three high risk neuroblastoma, a cancerous tumor above his adrenal glands, in December 2013. He is alive, having survived cancer and the chemo treatments.

His father Ron BeQuette was able to be by his side in another memorable experience this past weekend. Ron said they had applied for a Catch-A-Dream hunt several years ago when Brody was going through his cancer treatments and they were able to go on a special hunt in Texas thanks to the organization.

For three days, the father and son hunted in Lawn, Texas, on a ranch. A donor from New Jersey helped make the trip possible and met them at the airport in Dallas, escorting them to the ranch. Brody had opportunities to kill six-point and eight-point bucks but patiently chose to pass. He was after something much bigger.

“It was just an emotional roller coaster from start to finish. He passed on deer knowing there was a bigger buck out there and when one presented a chance he shot just a little low,” Ron said. “We had to track it for about three hours. There was no blood at the shot site. After about three hours I caught a speck the size of a BB on a rock the size of a dime about 40 feet from the shot site. Brody was excited at first but after looking for it and not finding any blood at first I think he got a little disheartened.”

They pushed through and were able to find more of a trail after the first drop. By 10 a.m. Brody was holding the head of a 13 point buck which scored 157 ¼ inches in Boone and Crockett. Ron said when they had first seen the 13 point buck they had thought it was a nine point through the spotting scope. Brody used one of the ranch guns chambered in .243 to make a 145 yard shot.

Ron said the ranch has its own taxidermist and will do a shoulder mount for Brody. While the final harvest was exciting, Ron said the entire trip was great.

The terrain was different and took a lot of work to get to hunting stands. One day they had several deer around their spot with does and bucks presenting opportunities. Elk were off in the distance coming down a ridge so they decided to try and close the gap on an elk.

“We got out and started to stalk them. It was a lot of fun until a cow (elk) sensed us,” Ron said. “There was just a lot going on. Him being 13 I’m sure the emotions were running wild. He was very patient though. Eventually it paid off. It is hard to describe to someone the excitement before and after. Anytime you can sit in a stand with your son or daughter is special. Him learning the value of patience is special too.”

There were a lot of unknowns heading into the trip but the ranch welcomed the BeQuettes with open arms. Ron said they grew a tight connection in their time in Lawns.

“It is something we will always remember. The fellowship is a huge part of the experience,” he said. “They are an extended family we will always have. It was pretty exciting.”