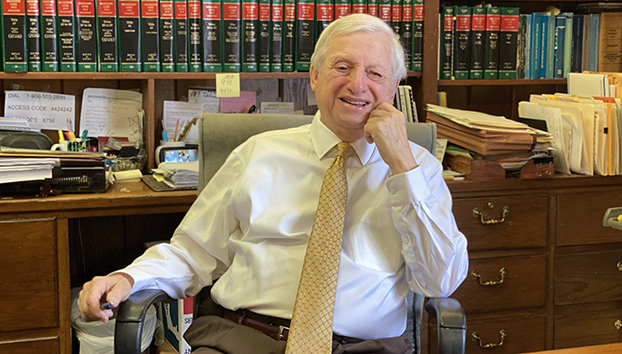 Walter Brown sits behind his desk in his office on Market Street in Natchez. (Jan Griffey | The Natchez Democrat)

“It doesn’t seem that long, but it’s time,” said the Natchez attorney.

He has served as legal counsel to the City of Natchez during the administrations of five mayors. He attended his last meeting of the board of Natchez Water Works as its legal counsel on Tuesday night. Brown has represented various Adams County boards and was the long-time legal counsel for the former Natchez Regional Medical Center.

Oh, the stories he could tell. But he won’t.

Instead, Brown spoke of the people and institutions with which he has delighted in working during his career.

Brown was born in the Natchez Sanatorium, “located just around the corner a few blocks away,” to Jake and Rose Brown. His father was an Adams County Supervisor for many years. His mother was a schoolteacher.

“My mother taught me kindergarten in her first class. Then she started Brown’s Kindergarten, and had it for about 10 years. She was a strong believer in early childhood education,” he said.

Brown went on to Cathedral School before joining the U.S. Navy after graduation.

At 17, he joined the U.S. Naval Reserve, whose office was located in Duncan Park.

“I spent time in England and Norway and a lot of time in the Caribbean.”

After returning home, he spent a year at the University of Southern Mississippi before deciding to study law and transferring to Ole Miss, where he completed his undergraduate degree and went to Ole Miss Law School, graduating in 1965.

He came home to Natchez and opened a solo law practice. In 1967, Brown ran for the state legislature.

“I served 12 years and realized I needed to come home and make a living,” Brown said.

About half of Brown’s legal career was spent practicing by himself. However, he has had a variety of legal partners through the years.

From 1973 to about 1982, Brown practiced with the late Joseph S. Zuccaro, William Riley, and the late Claude “Buck” Pintard in the firm Zuccaro, Riley, Pintard, and Brown. He also practiced with Philip Carby, and his son, Walt,  for a time after Walt graduated law school.

Walt, or Little Walt as some still know him, went on to practice with the District Attorney’s office and is now in his second term as Adams County Judge. He ran unopposed in November.

“As far as going to law school, going into the service gave me time to think and look around. I went to Southern my freshman year, and I definitely decided I wanted to go to law school and transferred to Ole Miss,” Brown said. “When you have a liberal arts background in education, and that’s what most lawyers do, you get more conscience about your institutions — churches, government, public service, public health. The Democrat is an institution. You become aware as a lawyer, you are obligated to maintain those institutions.

“Being my father’s son and being interested in policy as well as politics, I went to Washington D.C. in 1962 when John Kennedy was president and worked as an intern for U.S. Rep. John Bell Williams, which was a contrast,” Brown said.

Williams would later become governor of Mississippi. He was known as an advocate for racial segregation.

“That internship was a real revelation for me. Not only for law but for government generally. I was meeting people from around the country and getting into national and local policy.

“One of the things I did at the congressman’s urging was go to the Supreme Court,” Brown said. “I happened to be in the Supreme Court the day they were hearing the case Engel v. Vitale, which was about prayer in school. It is probably one of the 10 or 20 most important cases decided by the Supreme Court.”

The Supreme Court decided in that case that school-sponsored prayer in public schools violated the establishment clause of the First Amendment.

“The Congressman was taking umbrage to that decision. Having taken Constitution Law as an undergraduate, even at that stage in life, it seemed to me to be the right decision. That was a turning point that convinced me I wanted to study law,” he said.

Most of Brown’s work has been governmental in nature.

“This comes from your dad being a supervisor and going to Washington and being in the Legislature and meeting lawyers and other people from around the state. You end up in the public policy and administration side of law practice.

“I suspect at least half my law practice has been serving as counsel for boards, such as serving as the city attorney for 25 years (and) the hospital for about the same time,” he said. “You are on the inside. While you are counsel for the board, board members look to their legal counsel for not only what the law is but also they want to know what you think about this policy or that policy. Without getting totally involved in it, you become a listening point for aldermen, and you become a mediator between different viewpoints. That has been particularly true of the city.”

“Each was totally different in every respect. All of them wanted to do something for the community. All of the aldermen and all of the mayors I’ve served with came to the point of realization that they needed to work as a team, and they did work as a team. There have been exceptions, but not many,” he said. “I thought they all did a good job. Serving in public office these days is sort of like being a newspaper editor. You get a lot of criticism. Nobody tells you about the good things you do.”

‘Natchez is my hobby’

“Natchez is such a special city. People say, ‘You don’t have any hobbies,’ and I say, ‘I do. Natchez is my hobby.’ That’s enough hobby to take care of all my time,” Brown said.

Newcomers to Natchez quickly become a part of the community here.

“Look at Dan Gibson. He is so enthusiastic. Here is a guy who was the mayor of Crystal Springs who comes to Natchez and falls in love with it. People come to this town because there is something magical about the name Natchez. Savannah, Charleston, New Orleans, Natchez. Natchez has attributes of those great cities of the south.

“I love to take guests to Texada and tell them, ‘This is where the territorial legislature met, and it was also a bar. Here is where we raised the first flag,” Brown said. “When new people come into the community, immediately they are part of the community. Not only do they usually bring some good financial backing, but they also get right into Natchez.”

Brown is the father of six children: three with his first wife, Joan — Walt, Patrick, and Melissa; and three with his wife, Missy — Michael, Matthew, and Hester Rose.

“Unfortunately, one of my children, Melissa, died in 2019. Melissa was born in 1969, so she would have been 54. That was and has been a tough situation. But she has children, and she has grandchildren.”

While he will no longer work for clients, Brown said he would still come to his office as usual.

“I am going to read all of the books that I bought over the years. And I am going to enjoy my wife and family.”

And he will continue to enjoy his hobby — Natchez.