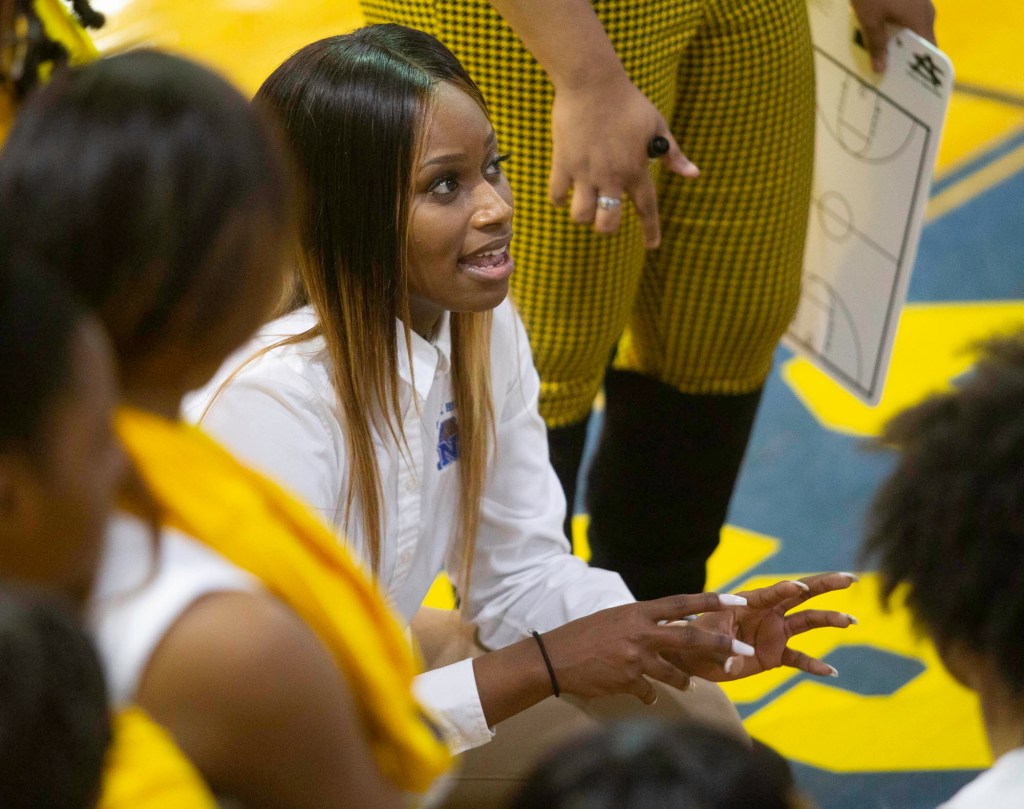 Natchez High Athletic Director and Head Coach Alphaka Moore encourages her team during a timeout Wednesday night in the second round of the region 6-5A state basketball tournament. (Bill Barksdale for The Natchez Democrat)

NATCHEZ — Both of Natchez High School’s varsity basketball teams will be playing the same tournament this week after all after a change was made to the schedule earlier this year.

Now the Bulldogs and Lady Bulldogs will both be playing at the Hattiesburg High School Holiday Tournament, which Bulldogs head coach David Haywood said is a double-elimination tournament that starts on Wednesday and runs through Friday.

The Natchez High Bulldogs were originally scheduled to play at the McComb Holiday Tournament, but Haywood said the schedule change allowed them to play in the same holiday tournament with the Lady Bulldogs.

And the Class 5A Bulldogs will have their hands full on Wednesday afternoon when they take on the No. 1 team in all of MHSAA Class 6A, the Horn Lake High School Eagles, in a first-round game with tip-off at 4:30 p.m.

“I think it’s a great opportunity to show how good we are. It’s another game. If we execute and stick to our game plan, we can give ourselves a chance to win the game,” Haywood said. “They’re a well-coached team. We’re going to have to minimize our mistakes and play a smart game.”

This will be the Bulldogs’ first game since last Tuesday, a stunning 61-58 loss at Class 4A Port Gibson High School. Their record stands at 9-4 overall. If they are to pull off the upset and advance to the semifinals, they will have to play better than they have as of late.

Before the loss at Port Gibson on Tuesday, Dec. 20, the Bulldogs narrowly escaped with a 44-43 win at Class 3A Franklin County High School on Friday, Dec. 16.

Against an undefeated Horn Lake team that’s 13-0 overall, Natchez High cannot afford to let its guard down. Especially considering how good the Eagles’ guards are.

“I think their guard play is really well from what I’ve seen on film. They don’t turn the ball over. They’re aggressive on offense and defense,” Haywood said. “But if we play our game and play consistent for four quarters, we have a chance for a great victory for our Bulldogs.”

Natchez High has been able to get in some much-needed practice game for much of the last week, Haywood noted. He added that the Bulldogs didn’t break from their routine for the holidays.

“We practiced the next day (after the Port Gibson game). We took off Saturday and Sunday. We were in yesterday and we’ll be in today. We’ve been in the gym practicing and getting in work,” Haywood said.

If the Bulldogs are to upset the Eagles, they would play the winner of the Jefferson Davis County-Hattiesburg game at around 7:30 p.m. Thursday. However, if Natchez High loses, it would play the loser of that same game at an earlier time on Thursday.

“Depends on whether you win or lose determines what time you play the next day,” Haywood said.

Haywood said he would like to see his players grow as a team with MHSAA Region 5-5A play just a couple of weeks away.

The Natchez High Lady Bulldogs are 8-5 overall and on a two-game losing streak heading into this tournament. And the road has not been very kind to them recently.

Now the Lady Bulldogs will go up against the Class 6A Pearl High School Lady Pirates at 12 p.m. Wednesday in a first-round game. Head coach Alphaka Moore said her team is ready to get back on the court and play in this tournament.

“Quite excited. Focused on what we have to do. Play to the best of our ability,” Moore said.

When asked what the Lady Bulldogs need to work on to get back to where they need to be as a team during this tournament, Moore said, “Just refocus on our goals that we set and execute.”

Even though Pearl has a losing record (exact record not known), Moore said the Lady Pirates cannot be taken lightly.

“They’re a fun, competitive team. They bring a lot of energy. We’re going to have to match that energy,” she said.

Moore said that the Lady Bulldogs have been at the gym a lot since the loss at Port Gibson last week and working to correct the errors that have led to their two-game skid.

“We put in quite a bit of practice time. We’ve been working on fixing our mistakes. We have not been playing smart and with the energy we need to get each game,” Moore said.