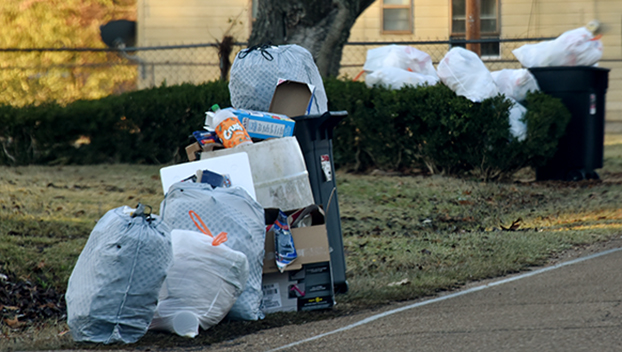 Garbage piles up at this home on Broadmoor Street in Adams County in late December. (File photo | The Natchez Democrat)

NATCHEZ — Residents who live in the county have piles of garbage overflowing cans at their curbs, but the county’s garbage collection company isn’t picking it up, or at least not as its contract with the county requires.

Adams County Supervisors President Wes Middleton said the company, Metro Services Group, which is based in New Orleans, has suffered a number of woes with its garbage trucks.

“From what I was told, they had some issues with some broken down trucks and had parts shipped in and they were the wrong parts. And the landfill shut down early. And the cold weather didn’t help anything,” Middleton said. “I do understand lots of people got picked up yesterday.”

However, Middleton said he learned Tuesday night that the company has filed for bankruptcy protection.

“I received an email telling me last night that the company has filed for Chapter 11 bankruptcy,” Middleton said.

The county originally entered into contract with Metro Services Group, based in New Orleans, more than four years ago, before Middleton, Supervisor Kevin Wilson and Supervisor Warren Gaines were in office.

“We renewed the contract during COVID,” Middleton said. “We had a certain time frame we could renew it and lock in the same prices.”

County Supervisor Kevin Wilson said he has never received as many phone calls from constituents as he has about the garbage collection in the county.

“Calls about garbage not being picked up started probably about two weeks ago,” Wilson said. “They are trying to do the right thing. They have been using pick up trucks and hauling a 16- or 20-foot trailer to pick up garbage. They are trying. But I wonder at what point that ends.”

Wilson said he, too, learned of the company’s filing for bankruptcy on Tuesday.

On his Facebook page on Tuesday, Wilson posted, “Metro Service Group has filed for Chapter 7 bankruptcy. We will try to get a short-term contract from another garbage collector as fast as we can. That will get us through until a new long-term contract can be signed. We have all been fighting to get our garbage pickup up for two weeks, to no avail. This explains the problem. I am sorry for any inconvenience and we will be working to get this resolved.”