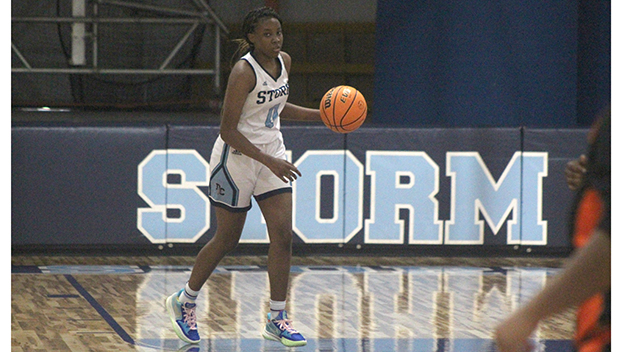 SICILY ISLAND, La. — Delta Charter School sophomore guard Roniya Ellis ended up scoring almost as many points by herself as host Sicily Island High School had as a team as the Lady Storm pulled away for a 66-29 win over the Lady Tigers Tuesday night at the Sicily Island Tournament.

Ellis, as well as the entire Delta Charter team, overcame a slow start offensively and finished with a game-high 28 points. Lady Storm senior guard Chyann Lee joined Ellis in double-figure scoring as she contributed with 17 points.

Despite the 37-point margin of victory, head coach Ronald Ellis was none too pleased with the Lady Storm’s performance in the first half. At least not on their end of the court as they led Sicily Island just 19-13 at halftime.

Even though the Lady Tigers scored just two points in the first quarter and trailed by eight points by quarter’s end, they outscored Delta Charter 11-9 in the second quarter to get within striking distance.

But in the second half, the Lady Storm dominated on both ends of the court. They outscored the Lady Tigers 13-7 in the third quarter and a stunning 34-9 in the fourth quarter to make their head coach much happier.

“It was defense, mainly. They picked it up on the defensive end. Had a lot of steals,” Ellis said.

As for the performances both Roniya Ellis as well as Lee had, coach Ellis said, “They were both good efforts late. Roniya, she shot the ball well. Chyann, her defense led to her scoring. She generated a lot of steals for our defense. They both started out slow. I got on to them real bad in the locker room.”

The Lady Storm improved to 7-6 overall and had two more games at the Sicily Island Tournament. They took on Tensas High School at 3:20 p.m. Wednesday, followed by a match-up with Madison High School at 4:45 p.m. Thursday.

Delta Charter got off to a slow start themselves, but unlike the defensive performance the Lady Storm put on in its win over Sicily Island, the Storm trailed Block for much of its game. The Bears led 16-13 after one quarter of play and then outscored the Storm 20-12 for a 36-15 halftime lead.

“It was a real slow start. Missed a lot of lay-ups. We’ve got to learn how to win close games,” Storm head coach Ronald Ellis said.

The reason it ended up being a close game in the first place was that the Storm got back in the game in the third quarter, outscoring Block 16-6 to trail 42-41. Delta Charter had more than its fair share of opportunities to pull the comeback victory, but the Storm could not take advantage of them.

“We missed 10 free throws in the fourth quarter. It was like a one-, two-point game. We had the lead at one point,” Ellis said. “We had too many opportunities and we gave it away. We missed like three easy lay-ups.”

Ellis noted that in the final minute of the game alone, the Storm had three chances to either tie the game or take a one-point lead.

“They made the shots they needed to make and we just couldn’t make our shots,” Ellis said.

The Storm fell to 3-8 overall and next played at the Sicily Island Tournament at 6 p.m. Thursday against Madison High School.