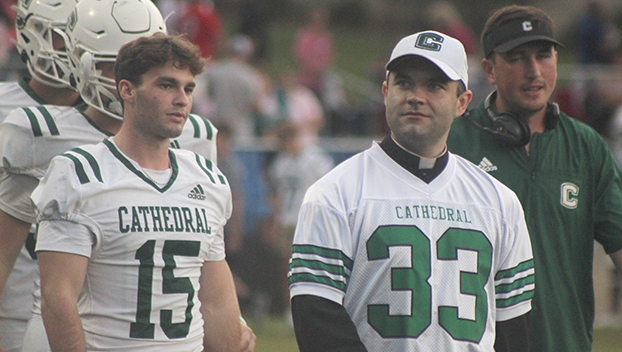 Right, the Rev. Aaron Williams will look to hire a new athletics director and head football coach for the Cathedral Green Wave. He is hoping to build a winning program at Cathedral that also molds student athletes into good citizens. (Hunter Cloud | The Daily Leader)

NATCHEZ — Cathedral’s search for a replacement to fill two positions in athletics continues but the end could be closer. St. Mary’s Basilica Rev. Aaron Williams said they are awaiting the appointment of a president for the school in order to move forward with hires.

Green Wave athletic director Craig Beesley retired from the position this fall. He still plans to coach softball for a few more seasons. Football Head Coach Chuck Darbonne resigned at the end of the 2022 football season. He continues to teach at the school until the end of the year.

Aaron Williams said in November his hope was to find someone who could help Cathedral win in athletics and continue to develop the students into better citizens. He added the next coach or athletic director needed to be someone who was a “good role model for student athletes and someone who commands respect.”

Williams had originally set a timeline of getting the football coach hired first and then worrying about the athletic director. His update Thursday afternoon was the hires could be on the horizon.

“I feel confident we are about to be in a position where we can fill it,” he said.