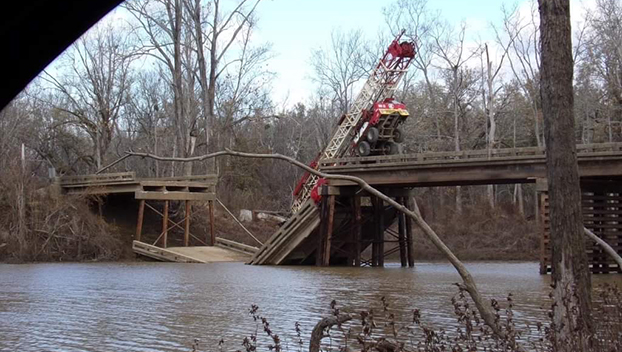 State and local Emergency Management Agencies are working on a bridge collapse at the Jackson Point Bridge in Woodville.

The collapse occurred around 10:30 a.m. on Thursday when a rig driving across the bridge fell through. No injuries occurred.

Since then, county officials and the Wilkinson County Emergency Management Agency have been working to assess the needs of residents that live on the northwest side of the Buffalo River. Jackson Point Bridge serves as the main entrance to that section of the county, which houses mostly secondary homes.

County officials are working to identify various methods to evacuate roughly 25 residents from that area.

“We’ve been in contact with those residents. We have no unmet needs at this time and we are working quickly to get these people to their primary homes or other sheltering,” said Wilkinson County EMA Director Mattie Powell in a Friday news release.

Wilkinson County EMA is also working with Delta Workover to remove its rig from the bridge.

Adams County Emergency Management Director Robert Bradford, who assisted at the scene, said the rig remains suspended from the collapsed bridge and that the driver managed to climb down and get out safely.

“They are trying to figure out a safe way to get the rig out,” he said. “It’s going to be an ongoing event over the next few days and these next few days are crucial with the rain and weather we’re experiencing.”

Their primary focus has been getting residents of the area in and out safely and making sure they are supplied with everything they need, and Bradford said local and state EMA officials coordinated a plan for doing so.

“The Mississippi Emergency Management Agency is on-site assisting the county,” MEMA officials stated in the news release. “We want to thank Brad Bradford with Adams County EMA for his assistance.”