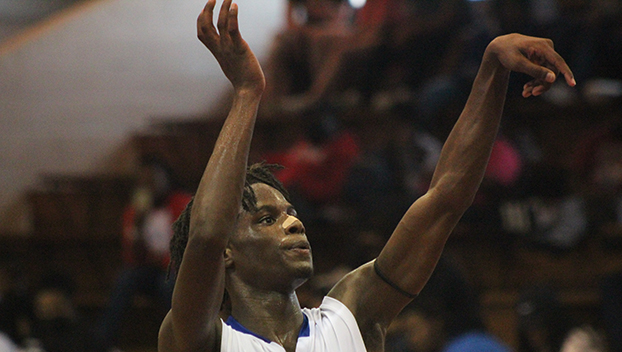 Christopher Brooks was one of the leading scorers for the Vikings as he added 16 points to a Viking 79-43 win over LaSalle High School Wednesday. Vidalia dropped last night's game to Richwood High School in a 77-34 loss. (File Photo | The Natchez Democrat)

COLUMBIA, La. — The Vidalia High School Vikings got off to a torrid start last Wednesday afternoon at the Caldwell Parish Tournament with a blowout win over LaSalle High School, only to lose last Thursday afternoon to Richwood High School in similar fashion.

Marc Perkins led all scorers with 17 points and Christopher Brooks added 16 points as the Vidalia Vikings cruised to a 79-43 win over the LaSalle High School Tigers.

Perkins and Brooks were two of four players for Vidalia to score in double figures. Michael Randall finished with 15 points and Kabari Davis added 11 points.

The Vikings got off to a strong start on both ends of the court in the first half. They jumped out to a 25-14 lead over Lasalle by the end of the first quarter and extended their lead over the Tigers to 22 points, 52-30, at halftime.

Vidalia’s defense wore down LaSalle in the second half and it showed. The Tigers scored just seven points in the third quarter and a mere six points in the fourth quarter. Meanwhile, the Vikings had 16 and 11 points, respectively.

But on Thursday afternoon, Vidalia ran into a buzzsaw in the LHSAA Class 3A Richwood High School Rams as they improved to 12-4 overall with a 77-34 win over the Vikings. No other information on that game was available.

Vidalia continued play at the Caldwell Parish Tournament last Friday as the Vikings went up against the Winnfield High School Tigers at 5:30 p.m.