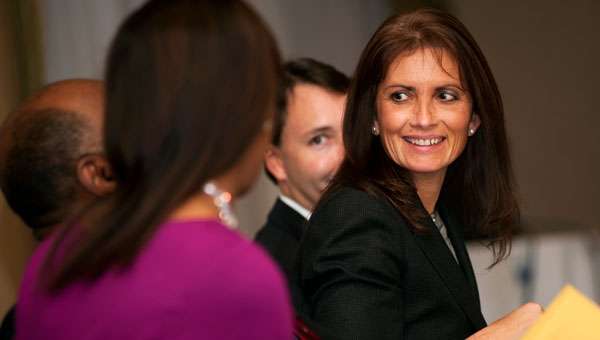 State Sen. Melanie Sojourner sits at a table with other state legislators during the annual legislative breakfast sponsored by the Natchez-Adams Chamber of Commerce. (File photo)

NATCHEZ — The 2023 Regular Session of the Mississippi Legislature begins very shortly after the New Year holiday, at noon on Tuesday, January 3, 2023.

With the session so close on the horizon, we asked legislators representing Adams County their take on a few hot-button topics, starting with what their priorities are for this session.

One thing on each of their minds is directing $300 million left in the American Rescue Plan Act fund and a $1.4 billion surplus in state funds to help Mississippi residents in the best possible way, but their ideas differ on what those ways should be.

District 97 House Rep. Sam Mims V, R-McComb, said he plans to use his position as a member of the appropriations committee to focus on ways to help Mississippi residents who are struggling due to inflation.

“Our economy is doing very well. However, we have to be very mindful of what is on the horizon,” Mims said. “I’ve never seen more of a disconnect between what is happening at Jackson and what is happening in Washington, D.C. We have to understand people are still struggling due to inflation. Gas prices and mortgages are higher, and there are supply chain disruptions that affect everyone. I plan to focus a lot of my time on appropriations as a member of that committee on how we spend our normal state budget.”

Mims said he supports the elimination of the state’s income tax, which would both help those struggling with inflation and make Mississippi more attractive to those on the fence about moving here.

“In 2022, We passed the 4% income tax rate by 2026. It’s a start,” he said. “We were able to get a $240 million per year teacher pay raise and still cut our income tax. Our eco is in great shape. I think it’s time we start looking at our state’s income tax further. I support eliminating the income tax and I think we will continue to have some good discussions on that in 2023. I think we do need to give our taxpayer’s money back.”

“More than anything the people of Mississippi deserve a meaningful long-term tax cut,” she said. “We can do that by eliminating our state income tax.  Our state is on solid financial footing and now is the time to make this move. Sadly, Lt Gov Hosemann is the only statewide official who hasn’t supported this policy so we haven’t been successful in getting it passed. Now is the time to give hardworking Mississippians a break and allow them to keep more of their hard-earned money.”

On the flip side, District 94 House Rep. Robert Johnson III, D-Natchez, said there are several issues in Mississippi — particularly in healthcare and infrastructure — that will require a lot of money to fix. These should take priority over cutting out the state income tax, he said.

“I think we should take care of our needs first,” Johnson said of further reducing the income tax. “Hospitals take money.”

District 96 House Rep. Angela Cockerham, I-Magnolia, said she feels the state’s income tax will be a hot topic this session.

“One of the primary reasons we pay taxes is to provide services, through government agencies, for our residents. The state currently has a revenue surplus,” she said. “We must ensure that our state agencies, as well as the services provided, will be sustained. There will be continued discussions regarding the elimination of state income tax and a review by

committees in the upcoming session.”

Johnson said he hopes to direct ARPA funds to infrastructure needs, particularly toward drainage issues in Natchez and Adams County.

“Natchez and Adams County have several immediate needs that I want to address,” he said. “That is high on my priority list. Another is to address urgent needs facing hospitals, especially rural hospitals in Natchez and Fayette that are close to closing. Not only those but we have to address the emergency needs of hospitals across the state.”

When Mississippi voted down Medicaid expansion, Johnson said, “We turned down $1 billion federal dollars a year, 100 percent funding from the federal government to make sure working people have access to healthcare coverage in our state.”

Johnson said the “most permanent” thing Mississippi could do to improve healthcare access — and create jobs as a state with one of the “lowest doctor-per-patient ratios in the country” — is to accept those federal dollars. Johnson also supports adding 12-month postpartum coverage for women on Medicaid.

Cockerham agrees with Johnson on the Medicaid issue.

Mims, a member of the Medicaid committee and also the chairman of Public Health and Human Services, said he is also highly concerned with the low doctor-patient ratio in the state but believes Medicaid expansion is not the answer.

“Sixty-five percent of births are on Medicaid today,” he said. “I think we can look at other ways to improve healthcare.”

Mims said he is working on legislation that would help the state retain and hire nurses and doctors.

“We have around $300 million left ARPA. We spent about 1.1 billion in 2022. I want to find ways to send some of that money to our hospitals to assist them. Like the rest of us, they too have been dealing with higher wages, higher material costs and supply chain issues. Their reimbursements are not following the same rate of increase as the cost. Finally, I think we need to find ways to encourage nurses in rural parts of our state in positions that will proctor citizens in nursing school or med school. We need more nurses and physicians in Mississippi.”

Sojourner said, “Now is not the time to expand Medicaid and push for new welfare programs that will only rob Mississippi families of more of their income.
“To grow the economy we must give taxpayers a break, scale back the size of government and push back on the federal overreach that is limiting individual liberty and stifling small business growth in Mississippi.”

Mims said he has been meeting with the Commission on Life and discussing ways to support mothers and new babies in light of the Roe v. Wade Supreme Court ruling.

“Because of that, we estimate an additional 5,000 babies to be born in Mississippi,” Mims said. “We have 19-20 Federally Qualified Health Centers. They can provide avenues to assist those moms and babies right now. We need to appropriate to those FQHCs. We also have to make foster care and adoptions easier. There is sometimes red tape on both. We need to look at ways to make it less expensive and reduce the red tape and find ways to make sure fathers are paying child support. We think they are but need to make sure everyone is.”

Mims also challenged the faith communities who have been praying for the Roe v. Wade decision for decades.

“I believe that they need to step and be a part of the solution,” he said.

One thing Johnson said he is passionate about is giving Mississippians back the ability to address issues with ballot initiatives.

On May 14, 2021, the Mississippi Supreme Court overturned Initiative 65, the 2020 medical marijuana initiative, because the petition did not comply with the signature distribution requirements in the Mississippi Constitution, which states, “The signatures of the qualified electors from any congressional district shall not exceed one-fifth of the total number of signatures required to qualify an initiative petition for placement upon the ballot.”

During 2001 redistricting after the 2000 census, however, the number of congressional districts in the state was reduced from five to four, creating a mathematical impossibility to follow the state’s constitutional requirements concerning ballot initiatives.

To correct this, the state’s constitution would need to be amended.

“The Supreme Court ruled that we needed to make a change in the law and it is very important we do so,” Johnson said. “That is how we were able to ratify the change in the flag and pass the medical marijuana bill. We have taken that away and we need to get it back.”

In the last session, a historic teacher pay increase passed. Cockerham said attention should now be turned to school district support staff, one of her top priorities this session in addition to infrastructure, and support for judges and “the judicial system’s support for judges and law enforcement to handle their cases in a timely manner, as well as ensuring that drug, veterans, and mental health courts continue to thrive in Mississippi.”

Most feel that decision should take in the opinion of those most affected by it.

“The summer break is utilized by our teachers and administrators to plan and for students to refresh for the upcoming school year,” Cockerham said. “The population that will most be impacted, including teachers, parents, administrators, and the Mississippi Association of Educators, must be an integral part of any discussions to modify the school calendar to shorten summer breaks and add additional breaks during the school year.”

Mims said, “Before COVID we were seeing very good improvements in education. We saw our third graders score high on the national stage. I think our current calendar makes sense. I’m not in favor of changing our calendar unless I see something that changes my mind.”

Sojourner said education needs to be addressed at the university level.
“We must do something to block the ‘woke’ culture that is crippling our society by indoctrinating our young people who are trying to further their education,” she said. “There are steps we can take to do this and there is no better time than 2023. We are going to start by introducing legislation to do away with tenure for university professors. We must have the ability to remove facility members who are more interested in pushing their personal cultural beliefs onto students instead of simply teaching their course subject matter.”