Year in review: Miss-Lou’s most momentous stories of 2022 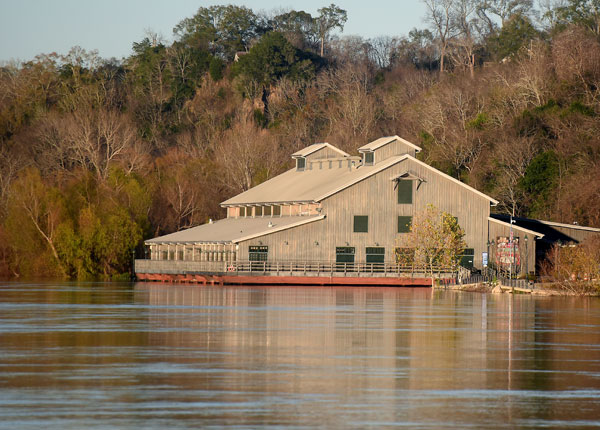 The Mississippi River flows under the Magnolia Bluffs Casino at the end of Roth Hill Road. (Ben Hillyer/The Natchez Democrat)

NATCHEZ — It was a year of celebrity visits, including a Patti LaBelle concert attended by the French Ambassador to the United States, Philippe Etienne. Morgan Freeman was here, working on his TV series about famous jail escapes.

It was a year of anger. The community responded to shootings, seeking answers and solutions, while the Natchez mayor blasted a journalist for writing about those crimes and a citizen whose home had been shot into for sharing his story.

It was a year of loss. A Natchez coaching legend, Bobby Marks, 88, died in the same year his grandson, Matthew Marks, 33, died in a car crash not far from his home. Several vigils and awareness walks remembered those in our community, including teenagers, who took their own lives.

Jerry Lee Lewis was laid to rest in Clayton after a standing room only crowd packed Young’s Funeral Home in Ferriday to hear his cousin, evangelist Jimmy Swaggart, say his eulogy.

It was a year of record-breaking gains, like the city’s sales tax revenues, or that the county and city are each funding huge bond issues for road repairs without raising taxes to do so. And the addition two riverboat cruise ships, which will bring hundreds of additional tourists here each week.

It was a year of contrasts and growing pains, reflecting in stories in 2022 in The Natchez Democrat.

Marcus Archer, pastor of Crosspoint Church in Natchez, accepted the reins of The Stewpot from Amanda Jeansonne, who was the handpicked successor to long-time Stewpot director the late Louis Gunning and had served since 2015. Gunning had directed The Stewpot for 26 years.

The Stewpot serves meals from its location on East Franklin Street every day of the year and delivers meals to many who can’t get out to get them, all through the work of volunteers and private donations.

Archer said his work at The Stewpot was the work of God.

Vidalia’s Syrah Technologies announced a $176 million expansion to the graphite processing facility. The expansion gives the state a supply-chain foothold in the rapidly expanding market for electric vehicle components produced in the U.S.

Syrah expects to create 36 new jobs with average annual salaries of $69,000 plus benefits. Louisiana expects an additional 52 new jobs in Central Louisiana because of Syrah’s expansion.

County and city officials found out the Morgantown Road improvement project was included in the final federal spending bill for $2.4 million, approved by both houses of Congress and signed by President Joe Biden.

Later, officials would learn those funds would only pay for about half of the project, the price of which had almost doubled since its original estimate.

In November, the city and county learned they would receive another grant that will pay for the remainder of the road and drainage project, which is expected to get under way soon.

Magnolia Bluffs Casino and Hotel were sold to a New York Casino company, Saratoga Casino Holdings. The deal was finalized in October and Tim Morrissey was named general manager.

Also in April, the Mississippi Department of Archives and History announced $8 million in grants to be shared by the Grand Village of the Natchez Indians for improvements to its museum and Historic Jefferson College, for improvements and the beginning of a school there to teach historic preservation techniques to professionals.

Circuit Court Judge Forrest A. “Al” Johnson, who had come out of retirement to replace Judge Lily Blackmon Sanders while she was away on medical leave, sentenced Jessica Aldridge, 34, to the maximum sentence of 20 years for manslaughter for killing her boyfriend, Joey Cupid, in 2019, and an additional 10 years for being a felon in possession of a firearm. However, Johnson suspended the 10 years, saying it should be served under house arrest after her 20-year manslaughter sentence has been completed.

In presenting his sentence, Johnson said Aldridge was a “modern-day jezebel” saying, “It is tempting to want to sentence you for the entire 30 years, but I don’t believe that will be justice in this case, even after the pain you have caused.”

Adridge stayed in the news during the time between her arrest and her sentencing, as she was in and out of jail for violating numerous restrictions while in jail and under house arrest, including getting pregnant while in jail.

A trio of juveniles face criminal charges for burglary and vandalism for what was determined to be more than $200,000 worth of damage they caused when they vandalized Vidalia Junior High School.

All three juveniles were under the age of 12 when they committed the crimes.

The juveniles spray-painted walls and hallways, damaged projectors and computers and ransacked classrooms.

Drake was sworn in on Thursday, Dec. 29.

Also in July, Coca-Cola announced it would close the Natchez Coca-Cola Bottling Co. here in 2024. Coca-Cola has not been bottled in Natchez in many years, and the facility has been used for distribution. That will come to an end by 2024.

The entire Miss-Lou community suffered a blow when Rosco on the Radio, Dave Kimbro, the beloved voice of Natchez radio, died after battling an illness.

Kimbro began working at WQNZ radio as a young man in 1970, broadcasting football games. After stints at other stations, Kimbro returned in 1990 to his Listen Up Y’all Media family and except for a brief and failed attempt at retirement, he was the voice of the radio station.

Ron Miller, who for 30 years was the driving force behind the Historic Natchez Foundation and historic preservation in Natchez, died unexpectedly.

Miller moved to Natchez in 1973 to work for the Department of Archives and History and preserve Jefferson College, said Carter Burns, who is executive director of the foundation today, and who said Miller was his mentor.

During the same month, J.T. Robinson, owner of the home of the late Nellie Jackson, long-time Natchez madam, defended his efforts to preserve that home after the Natchez Preservation Commission said it was being demolished a little at a time because of neglect.

Robinson called out the preservation commission by erecting a large sign in front of the home.

The Loy family sold The Markets to an Arkansas-based company, Harps Food Stores. The deal finalized in early December.

The late Harley Loy founded the grocery stores in 1969 with a single story when he took over Lewis’s grocery in Natchez. Barry Loy, president of Supermarket Operations, and his family had grown the company to seven stores.

The Loys had several suitors who wanted to buy their company, but chose Harps Food Stores, they said, because that employee-owned company shares the same values as the Loys have used to operate their business for more than 50 years.

The city and county received a windfall of $1.9 million in grant funds to completely fund the project to raise Silver Street and construct a riverboat docking facility and fund Phase 2 of the Morgantown road project.

“What has happened today for the City of Natchez is truly historic,” said Natchez Mayor Dan Gibson. “We did not get just one grant, but two, and 100 percent of the funds we requested, which fully funds both projects.”

The former owner of the Noah’s Ark Christian Childcare in Vidalia, Lysa Richardson, and her workers, Bridget Delaughter, Julianne Perales and Taylor Ragonesi, were sentenced in September.

Ragonesi, who was pregnant at the time of her sentencing, was ordered to serve three years of supervised probation.

Richardson filed for a new sentencing. However, that resulted in an increase in her sentence from seven years to nine years.