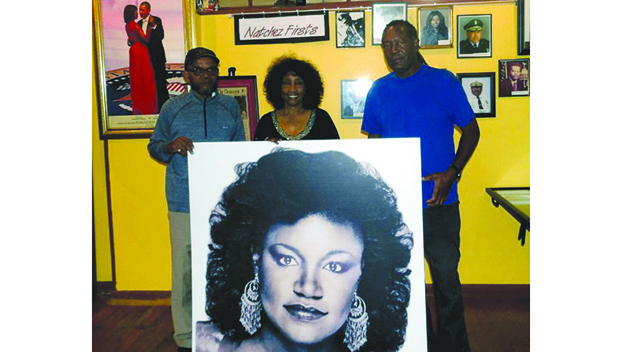 Former Natchez Mayor Philip West, left, joins Mary White, co-founder of Natchez Association for the Preservation of Afro-American Culture, and Jimmy Ware, president of Natchez Business and Civic League, in presenting a portrait of Daisy Newman to the Natchez Museum of African American History and Culture. Newman was a famous opera singer who passed in February 2021 at the age of 74. Her portrait will be the centerpiece of the museum’s upcoming “Black Butterfly” exhibit, according to Museum Executive Director Bobby Dennis.

NATCHEZ – Twenty-seven African American sites in Natchez will soon be recognized with their own historical markers. The markers will be unveiled in a ceremony called, “Celebration of Historical African American Sites,” that is set for 1:30 p.m., Wednesday, Feb. 1, 2023, at the Natchez Museum of African American History and Culture at 301 Main Street. It is free and open to the public.

The event is spearheaded by Mayor Dan Gibson and the museum’s executive director, Bobby Dennis, both of whom view the ceremony as a kickoff for Black History Month 2023. They also see it as an opportunity to celebrate the contributions of African Americans to Natchez’s history.

The markers, said Dennis, will allow visitors to have a self-guided tour of local African American history.

Gibson said the markers will play a vital role in telling the complete history of the city. “Following through with the commitment I made when I began my term as Mayor of Natchez, ‘to tell the whole story’, it brings me great joy to finally be able to recognize with signage these important historic sites,” Gibson said. He noted the sites and stories are “so significant to both the African American history of our city and our overall history!”

Gibson added: “I am very grateful to our partners who have helped make this happen… NAPAC, Visit Natchez and the Natchez Historic Foundation. I can’t wait for the unveiling.”

Dennis said it is an honor to recognize the selected properties and an opportunity to learn of their history.

“This recognition allows us to celebrate and show our contributions to the development of the city of Natchez,” he said. “The people involved with each one of these properties have made an impact on the city. Our stories as African Americans can now be told through these structures that have been left for us to view and to reflect on their history.”

In addition to Gibson, who will serve as guest speaker, several guests will participate in the ceremony. They include a founder of NAPAC, who will do the welcome; the Rev. Clifton Marvel, who will provide the opening prayer; and the Rev. Leroy White, who will give the introduction. Dennis will give the closing remarks.

Forks of The Roads

Proud to Take a Stand Monument

The Sidney and Sarah Russell House