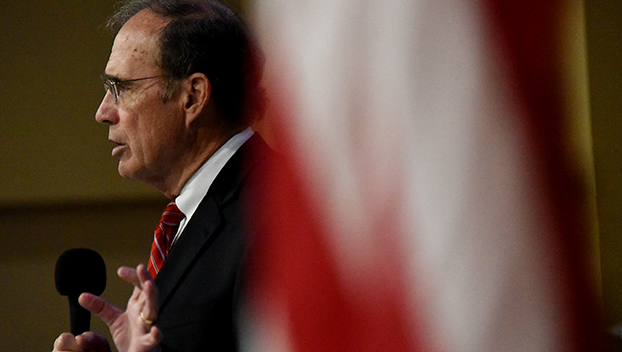 The event begins at noon at the Natchez Grand Hotel, 111 Broadway St., and he will be available after for questions.

Hosemann filed Thursday to seek reelection, launching his bid for a second term as the state’s second-highest-ranking official.

Touting a state budget surplus of over $1 billion, a reduced number of state government employees and a smaller state debt, Hosemann said his first term was guided by “responsible, conservative, Republican leadership.”

Hosemann appeared to lay the groundwork for a contrast with a potential primary challenger and promised to run a campaign focused on policy issues.

“To me, if you’re a candidate, you tell people what you do and have done and what you promise to do,” Hosemann said at the state Republican Party headquarters. “I’ve got a record. I’ve reduced the size of government, paid off debt, teacher pay raise, infrastructure, most money in the bank. If you look at that and you like what we’re doing, you can anticipate I’ll do the same thing.”

Hosemann, of Jackson, is an attorney and served three terms as secretary of state before winning the lieutenant governor’s race four years ago. One candidate who faced Hosemann in the 2019 Republican primary, Shane Quick, has filed to run again.

No names of Democratic candidates who have filed since the qualifying period began Tuesday have been released.