Rebels defense lead the way in blowout win over Tigers 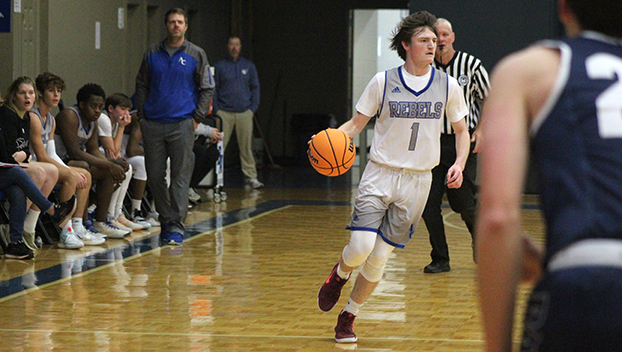 Landon McGuire led the ACCS Rebels with 12 points in a 67-31 win over Centreville Academy Thursday night. Defense was the biggest key to victory for AC. (File Photo | The Natchez Democrat)

And that was after Tuesday night’s scheduled games at Copiah Academy in Gallman were postponed for nearly three weeks due to the severe weather that rolled through the Miss-Lou region throughout the day and part of the night.

After a back-and-forth first quarter in which neither team was able to get too far in front of the other, ACCS’s defense came to life in the second quarter and the Rebels took control from there as the cruised to a 67-31 win over the Tigers.

“It was a great team effort. Kids played really hard coming off the Christmas break,” Rebels head coach Matthew Freeman said. “It was a big tune-up game for a huge district match-up tonight with St. Aloysius.”

Twelve players on the Rebels’ roster found their way into the scoring column for what was indeed a true balanced scoring attack. Landon McGuire led the way with 12 points while Trenton Davis and Samuel Merriett finished with eight points each. Jessie Grayson contributed with seven points.

Both teams came out ready to go offensively in the first quarter, which ended with the Rebels leading the Tigers 23-12. The second quarter, however, would be a completely different story as ACCS outscored Centreville Academy 20-2 to take a 43-14 lead into halftime. Freeman noted that was the turning point in the ball game. It also helped that McGuire had a big first quarter.

“Defense holding Centreville to two points in the second quarter helped us going into halftime with a good lead,” Freeman said. “Landon came out and scored the first 10 points in the first two minutes. Set the tone early.”

ACCS continued to add to its lead by outscoring Centerville 14-9 in the third quarter and 10-8 in the fourth quarter. Freeman added that the Rebels made nine 3-pointers.

The Rebels improved to 11-5 overall and played host to MAIS District 3-5A foe St. Aloysius High School at 7:30 p.m. Friday.