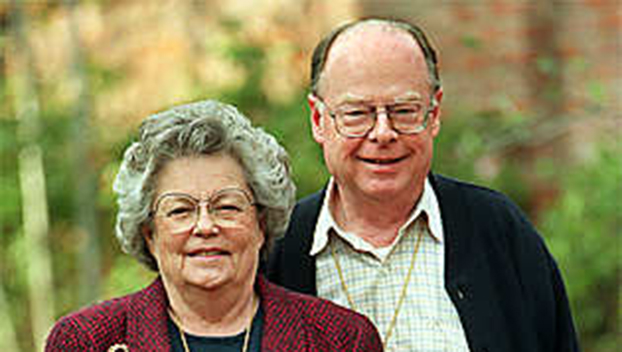 The Drs. Barnes — Bettina and Robert — in a photo from 2001 when they were chosen as The Democrat's Citizens of the Year. (File/The Natchez Democrat)

NATCHEZ — Dr. Bettina Barnes, a child psychologist who spent much of her life working to help children here, has died at 93.

The Barnes moved to Natchez in June 1950, when he began a medical practice here.

Bettina Barnes returned to college in 1970 and earned a doctorate in psychology from LSU in 1974. She opened a child psychology practice in Natchez and went on to establish a number of groups to help families and children suffering with mental health issues.

“She was a born leader,” said long time friend Carolyn Vance Smith. “Anything that was needed to be done at Trinity Church, she was always ready to help. She was immediately elected president of the Episcopal Church Women at Trinity Church. She was active in Sunday school work and other avenues of helping at the church.

“She was very active in the Natchez Garden Club, the Historic Natchez Foundation and was an active supporter of the Natchez Literary and Cinema Celebrations and the Natchez Festival of Music,” she said. “Bettina was warm and kind and brilliant and loved by many. She was an unusually strong person with a sweet nature.”

Barnes and her husband love to entertain and did so in a way that made it look effortless.

“They were the ultimate host and hostess, so relaxed. Their concern was making sure you had a good time,” Smith said.

Marion Smith and Carolyn Vance met the Barnes before they were married.

“Marion knew Bob and we became close friends. Marion and I have been married for 55 years and we were friends before that. Our interests were similar. We had many wonderful trips together and adventures of all kinds. It was a great and wonderful friendship,” Smith said.

The Barnes family plans a celebration of life in Natchez at a later date. Her full obituary is online at natchezdemocrat.com and is in Friday’s edition of The Natchez Democrat.