Starting to settle in: Wallace reflects on final game, looks ahead to pro day 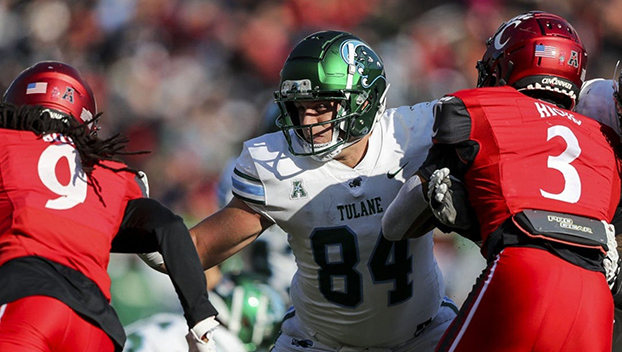 Will Wallace will enter the NFL draft as a blocking tight end. He is a former Cathedral Green Wave and recently won the Cotton Bowl with Tulane in a 46-45 win over USC. (Courtesy Photo | Tulane Athletics)

NEW ORLEANS — Will Wallace woke up Wednesday morning after days of being on “Cloud 9” following his team’s 46-45 win over the University of Southern California in the Cotton Bowl Monday. He spent six years playing for the Green Wave and helped them turnaround from a 2-10 season to 12-2.

The win was surreal because it encapsulated the Green Wave’s comeback story. A hurricane displaced the team for a few months in 2021. They lived in a hotel in Birmingham, Alabama, and had a tough season that year. Players could have left the program, but many chose to stay with Head Coach Willie Fritz.

Wallace said the team was player-led in the offense and they transformed into a strong opposition this season. Monday afternoon, they scored a last second touchdown to take the lead over USC for the first time in the game. At one point, the Trojans led by two touchdowns, but the Green Wave roared back.

“It is still a little surreal. It is a special group of guys here,” Wallace said. “It was like a Cinderella story. On the Playstation Three, I would play Road to Glory on NCAA 14 and take a G5 school team and  transform the program and that is what this was like. It was really special.”

It was the biggest stage Tulane had played on since the 1932 Rose Bowl. Wallace said it was special to see their fans fill the stands at AT&T Stadium in Arlington. His former lineman coach Kurt Russ sat behind the bench during the game.

They were able to speak following the trophy presentation, Wallace said. Things had come full circle for him at that moment. He had won a state championship with Russ at Cathedral and then won a Cotton Bowl championship in front of him.

Bowl week was unlike any other, he said. The Cotton Bowl staff were great hosts and offered first class treatment to the program. Tulane players went to a Dallas Mavericks game, got to bowl together and spent other time bonding as a team. They visited a Children’s hospital where Wallace met a kid named Ashton.
“It was very impactful. We bought balloons and presented a jersey to kids as honorary captains,” Wallace said.

Preparing for next step

Before the bowl game, Wallace said he planned to enter the NFL draft. Russ said Monday he felt his former player had what it took to make it to the next level. Wallace’s journey to the NFL will start with Tulane’s pro day in early April.

Until then, Wallace will take some time to rest his body before training. He suffered some minor injuries this season and needs some time to heal before the pro day.

“I want to get my body right. I had another injury in the conference championship with an ankle sprain,” Wallace said. “I’m trying to get to where I was physically before the injuries, so I have the best time possible.”

Wallace is one of 15 seniors on the Tulane football team. He said he believes the team will continue to have success after this year’s 12-2 run. A Cotton Bowl victory elevated their standard and the program had success in the past. Tulane won three SEC championships before they left the conference and went undefeated in 1998 under Tommy Bowden in the Conference USA.

The Green Wave are poised to lead the American Athletic Conference with the departure of Central Florida, Cincinnati and Houston to the Big 12, Wallace said. College Football’s Playoff expansion could help them stay on the national stage.

“I know people from Natchez don’t always get a chance to play football at this stage. There have been better players before me who never got the opportunity. I had a chance, too, and it was really special to represent Natchez,” Wallace said. “I was prepared for this game. I was focused and we were not worried at all as a team. It doesn’t matter if you play at Devereaux Stadium or Jerry’s World, you still have to play between the white lines.”