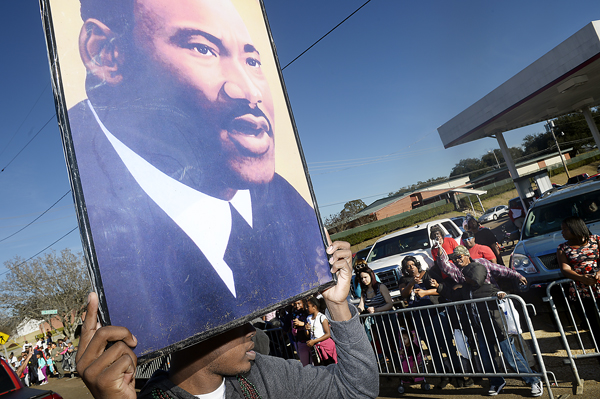 Taylor Chasley carries a portrait of Martin Luther King Jr. while riding on a float participating in the MLK Day parade in 2015. (Democrat file photo)

“It’s going to be a wonderful parade, beyond what we’ve had in the past,” said parade committee member Phillip West. “I look forward to enjoying this event.”

In addition to the Natchez High School band, the parade will feature bands from Ferriday High School and Wilkinson County High School, according to West.

Last year, because of Covid-19 concerns, several groups pulled out of the parade, said Marsaw. “Bands and dance troops did not participate last year,” she said. “But I’m excited about the participants this year. A lot of people are becoming interested. We have great participation this year.”

The lineup for the parade will begin at 2 p.m. on Broadway Street. The parade route will start at North Broadway and Franklin streets. From there, it will travel along Franklin to N. Dr. M.L. King St., where it will turn left and proceed up to Minor Street, where it will end.

The parade will be followed by trophy presentations at the corner of Dr. M.L. King and High streets for the best float, the baddest vehicle, bands, and dance groups.