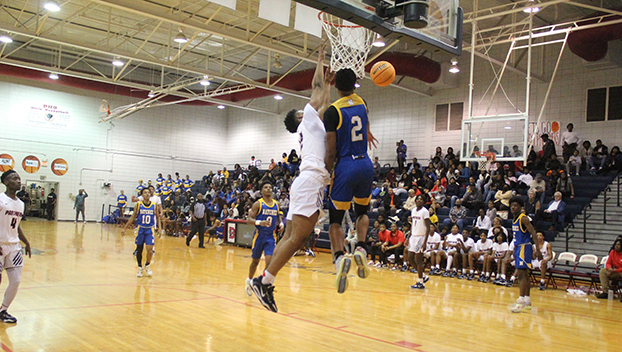 Kameron Carter blocks a shot attempt. He drained five three pointers and made a few blocks on defense as a small forward. (Hunter Cloud | The Daily Leader)

BROOKHAVEN — Natchez was within two possessions of Brookhaven with a minute left in their district boys basketball game but could not close the gap in a 47-42 Panther win Tuesday night. Brookhaven got off to a strong first quarter and jumped out to a 15-6 lead and their third quarter performance helped keep the Bulldogs at bay as they led 36-30 heading into the final frame.

His biggest shot of the night came at the free throw line as he stepped up and knocked down two clutch shots to finish off Natchez. Brookhaven had a five point lead and their defense forced a turnover from Natchez as time expired.

“We fought tonight and that’s all that matters,” Haliburton said. “I’m used to the pressure. I had to knock those free throws in. We played very well tonight and boxed out. We threw the ball up and got up the court quickly. We had some turnovers but we will fix it at practice.”

He said the victory was “just another win in the book,” as the Panthers defeated their district rivals. Natchez was 11-7 coming into the game and coming off of a 59-54 win over Ferriday last week.

Brookhaven was 9-11 coming into the game but improved to a 2-0 start in district play. They have four games left with two against Florence and one game against Natchez and West Jones. JJ Rice made three three pointers for the night for a total of nine points and could be a perimeter shooting threat for the Panthers.

Head Coach Charlton Grey was animated on the sidelines in a gray suit shouting instructions to his team. He pushed them throughout the game to execute and they did. Haliburton said they have a goal of winning district this year and reaching at least the second round of the playoffs.

“We will have to fight, keep working hard and never give up on our dreams,” Haliburton said. “Coach bolsters us up to go fight harder and get momentum over the team we are playing against.”

Natchez came close to getting their first district win of the year as Kameron Carter gave it his all on the court. He scored 26 points and knocked down five of the team’s seven three pointers on the night.

Carter made several defensive stops and blocked a few shoots as he guarded the basket as a small forward.

“I was doing whatever I could to get us involved and get us going and try to win the game,” Carter said. “I’m just trying to do what I can to help us win games and win district. We would be the first class to win district in a long time. If we could win this year it would feel good.”

Preston Jackson was the second leading scorer for Natchez with six points. Carter said the team’s challenge was they were not able to knock down shots.

Natchez missed some layups that could have swung the game in their favor. Carter said they can fix those as they stay focused on the district schedule with one game against Brookhaven and two games against Florence and West Jones left on the schedule.

Carter said they were disappointed to lose to their district rival but they could still achieve their goal of winning the district title. It will take effort, hard work and communication for everyone to be on the same page and win. A senior, he is determined to finish out the season on a positive note.

“It is stressful playing as a senior but good. For the younger guys you can be a role model. You can show them how to play,” Carter said. “I want to go to college and play basketball, maybe play professionally and become a physical therapist. Southern Miss, Jackson State and Southern are the three schools I would like to play basketball for.”