Natchez projects to benefit from $2.5 million grant for religious sites 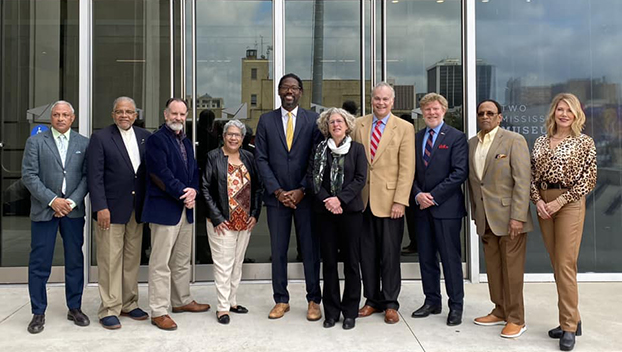 Two Natchez projects will benefit from a $2.5 million grant that is being awarded for the preservation and presentation of religious historic sites in Mississippi.

The Lilly Endowment Inc. has awarded the money to the Foundation for Mississippi History to help the Mississippi Department of Archives and History support and promote programs, activities, and projects focused on the understanding and interpretation of the role of religion in Mississippi history and culture.

According to news released from MDAH, the money will help the state invest in capital improvements at Historic Jefferson College near Natchez and at the Huddleston Memorial Chapel at Natchez College, a historically Black college open from 1884 to 1989.

Natchez Mayor Dan Gibson posted the news on Facebook with pictures taken in Jackson at the Two Mississippi Museums with MDAH officials. In the post, Gibson reported some of the funds will help with the preservation of the Methodist Church, located in Washington at Jefferson College. Natchez alderwomen Valencia Hall and Sarah Carter Smith also attended the announcement.

Lilly Endowment made the grant through its Religion and Cultural Institutions Initiative, a nationwide effort to help museums and other cultural institutions improve the public understanding of religion.

Through the grant, the Two Mississippi Museums will begin offering free group tours this summer to faith-affiliated communities in Mississippi—groups who attend churches, mosques, synagogues, temples, house churches, and more.

“We are grateful to Lilly Endowment for this major support,” said Katie Blount, MDAH director. “The foundation’s generosity will help more Mississippians experience these museums. Building an endowment to underwrite field trips for Mississippi students was paramount to our initial vision. With the recent passage of the five-year anniversary of the Two Museums, Lilly Endowment helps to build on that momentum and expand our educational outreach.”

The Museum of Mississippi History and Mississippi Civil Rights Museum treat comprehensively the history of religion—from the spiritual beliefs of Native Americans to the conflicting religious convictions of slaveholders and enslaved people, to the leadership of people of faith during the Civil Rights Movement.

“Museums and cultural institutions are trusted organizations and play an important role in teaching the American public about the world around them,” said Christopher Coble, Lilly Endowment’s vice president for religion. “These organizations will use the grants to help visitors understand and appreciate the significant impact religion has had and continues to have on society in the United States and around the globe. Our hope is that these efforts will promote greater knowledge about and respect for people of diverse religious traditions.”

MDAH is one of sixteen organizations from across the United States receiving grants through the latest round of the initiative. The Religion and Cultural Institutions Initiative began in 2019 with an initial group of eighteen grants. The group includes fine arts museums, historical societies and history museums, libraries, historic sites, museums dedicated to serving children and families and museums dedicated to particular geographic locations and cultures.

Lilly Endowment Inc. is an Indianapolis-based, private philanthropic foundation created in 1937 by J. K. Lilly and his sons, Eli and J.K. Jr., through gifts of stock in their pharmaceutical business, Eli Lilly and Company. While those gifts remain the financial bedrock of the Endowment, the Endowment is a separate entity from the company, with a distinct governing board, staff and location. In keeping with its founders’ wishes, the Endowment supports the causes of community development, education and religion. Although the Endowment funds programs throughout the United States, especially in the field of religion, it maintains a special commitment to its hometown, Indianapolis, and home state, Indiana.