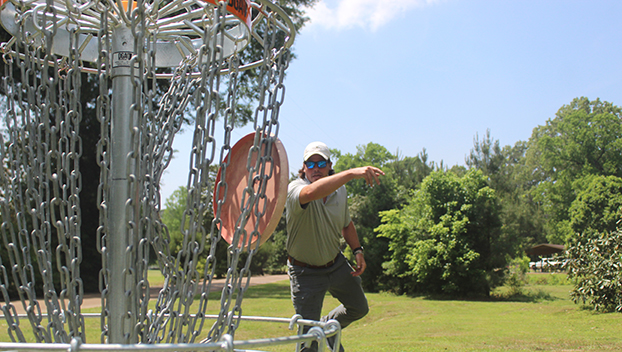 Tate Hobdy, who helped the Natchez Rotary Club put in the disc golf course at Duncan Park, launches a disc towards one of the baskets last May. Bluff City Open will be the first tournament held at the disc golf course. (Hunter Cloud | The Daily Leader)

NATCHEZ — Disc Golf competition will heat up at Duncan Park this April as Natchez hosts the Bluff City Open at the disc golf course in a two-round event on April 22.

Ryan Porter will serve as the tournament director alongside assistant director Richard Burke.

Natchez’s Rotary Club unveiled the new disc golf course in May 2022. Burke said the course was designed by Doug Williams, a renowned disc golf course designer. Porter said players had discussed how they could host the tournament well before they installed any baskets.

“He designed the course at Duncan Park to be a tournament ready course. We have everything in place now so it is a good time to get a tournament started,” Burke said. “We started talking about the tournament in October. We used to go play out there as a group, walk around and talk about having a tournament. We could figure out how to avoid log jams, where to point out of bounds and how to have a centralized location. Since we have played out there since it opened we have considered how we could do a tournament.”

The tournament will be a C-tier Professional Disc Golf Association event and the first one in Natchez. People can register online at discgolfscene.com/tournaments by finding the Bluff City Open. As of Thursday, 23 disc golfers signed up for the tournament out of 72 available spots. Burke said he expects the tournament slots to fill up. The people who have signed up come from a 150 mile radius of Natchez, Porter said.

Spectators are welcome to come watch and the tournament directors hope one day it will grow into an A tier PDGA event. Magnolia State Productions of Brandon will be there to broadcast the event.

There are 21 different player divisions between mixed pro, male and female, age groups and skill level. A cash payout is available for the pros with and players receive a pack filled with a t-shirt and a custom stamped R-pro pig, a putter disc which is overly stable and good for approach shots. Between the Pines in Brandon will award merchandise to amateur winners.

Those interested in sponsoring the tournament can email Porter or Burke at Natchezdiscgolf@gmail.com. They hope the tournament will grow disc golf in the community and bring economic benefits to the city.

“We are taking this tournament in stride and expect it to go well,” Burke said. We would love to have more in the future.”