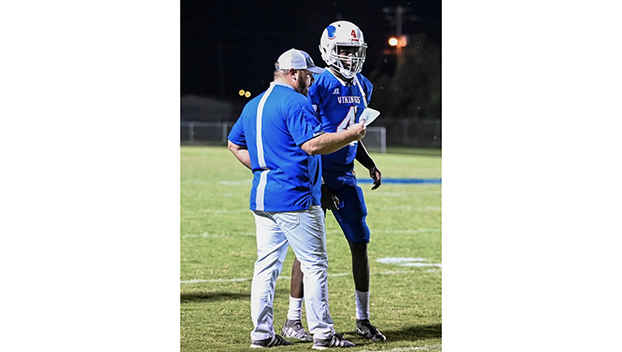 Josh Loy dreamed of Cathedral head coaching job since he was a graduate assistant at Delta State. He was named the football head coach and athletic director Saturday. Loy coached as an offensive coordinator at Vidalia. (Submitted Photo)

NATCHEZ — Josh Loy is returning to his alma mater to serve as a head coach and athletic director for Cathedral. He formerly coached at Vidalia as an offensive coordinator and spent time at Trinity Episcopal Day School.

Cathedral announced the news Saturday evening. Rev. Aaron Williams said he was grateful Loy agreed to return to Cathedral. He currently has three children enrolled at the school and was well prepared and well spoken in interviews, Williams said.

“He has prepared a great plan of action for the football team and also our athletic program as a whole,” Williams said. “He understands and appreciates our vision for the identity of the school. I have confidence in his ability to lead the program forward.”

Loy said he was overwhelmed with the support he has received and excited to get to work. He leaves behind a Vidalia team who went 6-5 this year and had started to turn the program in the right direction.

He said he has always tried to leave programs better than he found them. Head Coach Mike Norris resigned from the Vikings at the end of the football season as did Cathedral’s head coach Chuck Darbonne.

Williams said he had wanted to bring in an athletic director who was familiar with the community and could work well with the alumni. Loy should be able to fill the role the way Williams envisioned with his familiar face.

“I’m excited for him as a coach. When you are coaching you have certain dream jobs. Cathedral was his dream job,” Norris said. “He wanted it really bad and I am excited for him. He cares about the program and connects well with the kids. He can combine his experiences elsewhere with the good things they do at Cathedral and be successful as an Athletic Director.”

Loy confirmed Cathedral has been his dream job ever since he “was a graduate assistant at Delta State.” He feels honored to be chosen as the next head football coach and athletic director. His grand plans as athletic director are to elevate all of the teams, especially the girls athletic programs.

“We will hold these guys to a high standard and expect them to meet those standards on and off the field,” Loy said. “I want to meet with the guys on staff and see who wants to continue coaching. We will see if there are any openings but I’m excited to get started. I’m in an interesting position. I have three girls and they are all part of Cathedral athletics.  We aren’t just trying to fix football. All sports are important.”

Hardwork and getting uncomfortable are two ways the athletic programs will look to improve. Football’s journey will begin in the weight room by working to get faster, stronger and bigger. Kids will have to learn to love the process in order for success to translate to the field.

Norris said Loy loves the game of football and would try to learn more innovative ways to coach the game at different coaching clinics.

“He will make the team something the kids are excited to be around,” Norris said. “He has some old school in him as far as discipline goes. You have to do the small things the right way, but he is also willing to change and adapt his offense and program to fit what his kids are interested in and capable of.”