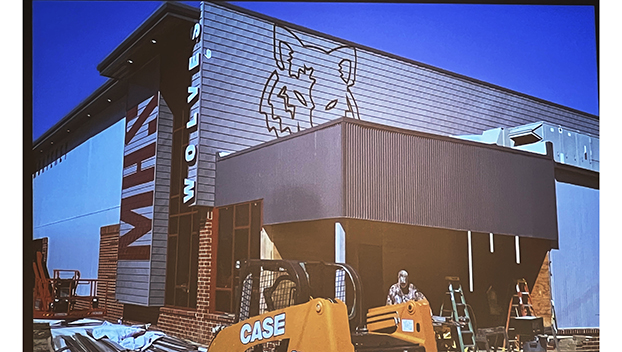 A photo of Monterey High School's new gymnasium shown to the Concordia Parish School Board during a meeting last October. (File photo)

VIDALIA, La. — Concordia Parish schools celebrate the new year with a new gymnasium at Monterey High School and by making small steps to fix the football fields at Vidalia and Ferriday high schools.

A ribbon cutting for the recently finished $3.2 million gym is scheduled for 4 p.m. Tuesday before the first basketball game on the new court.

The gym was completed a year behind schedule and 107 days behind an extension granted to contractors, said project manager Marco Gonzalez with Volkert Inc.

The school board intends to enforce penalties for the contractors’ tardiness.

The school board also discussed putting down new natural grass on the Ferriday and Vidalia football fields in place of the artificial turf that was discussed in previous board meetings.

Based on a similar project he worked on in 2022, Gonzalez estimated a turf field with a track around it would cost the school district $2.5 million per field. He estimated a natural grass field with the necessary irrigation and drainage mechanisms would cost anywhere from $500,000 to $600,000 each. The school board instructed him to get an accurate quote for the natural grass field and an alternate quote to put running tracks around the fields during their Thursday meeting.

In other matters, the school board welcomed new board members who were just sworn in on Thursday following the November election, including Wayne Wilson in District 5 Place B, Fred Marsalis Sr. in District 2, and Vanessa Houck in District 3 Place A.

Matthew Taunton ran unopposed for his first full term in the District 5 Place B seat previously held by John Bostic, who retired in November 2021, and Nicky Peré, who resigned from the school board in August 2022 and withdrew from the election.

A motion was made by Houck to appoint Taunton president and Marsalis vice president, but that motion failed with four yes votes and five nays.

The school board then voted to keep Butcher as the board president for another year and Forman as the vice president by a vote of 6-3.