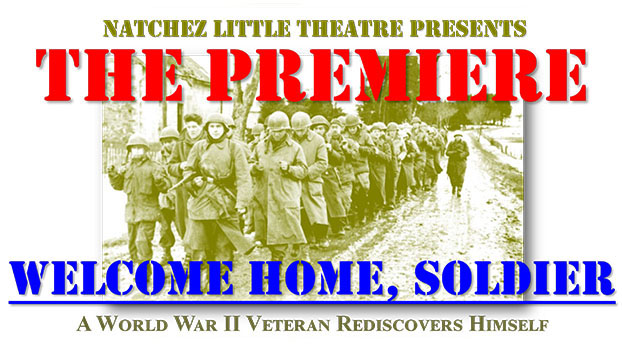 NATCHEZ — A new play about a war hero based on a real-life WWII and Battle of the Bulge Survivor who lived in Natchez debuts Saturday, Jan. 28, and Sunday, Jan. 29, at the Natchez Little Theatre.

“Welcome Home, Soldier,” written by G. Mark LaFrancis and directed by Devin Arnold, is based on the story Paul Foster, a beloved veteran who departed this life in October 2020 at the ripe age of 97 after he survived seven major battles of World War II.

LaFrancis, a published author, said this is his first-ever attempt at playwriting.

He thanked Judy Wiggins, a seasoned actress at Natchez Little Theatre, for helping him perfect the play and get it performance-ready.

Foster grew up in the community of Little Bahala, in Lincoln County, with 10 siblings during the Great Depression. He later worked at International Paper in Natchez and delivered newspapers for The Natchez Democrat for 28 years. At age 19, he enlisted in the United States Army and served from 1942 to 1945.

LaFrancis had many opportunities to interview Foster about his war experiences.

“One of his joys was to go into schools and talk about being a veteran,” he said.

As a frontline soldier, Foster likely faced the fiercest battles as the first ones out. It’s a wonder that he lived to talk about them years later.

Foster’s son, Glen Foster, said his dad didn’t speak about the war much when he was younger but became more open to talking the older he became.

“It’s an honor for anyone to write about your dad,” Glen said of the play. “As a youngster, I knew he fought in the war but I didn’t understand what that meant. … He had a prolific war experience. … I’ve realized what the odds are of him making it through every major battle and then living to tell about it. They are very slim.”

Bits of his dad’s character shine through on stage, like his pipe. Paul used to gnaw on it as a coping mechanism and then later took to puffing on it, Glen  said. Paul also had a sharp memory up to his last days and gave talks at Trinity and several other area schools about history and his experiences.

“Most older people who’ve been to war don’t like to talk about it,” Glen said. “He lived a good life, a faithful life and from that standpoint, it was easier for him to speak about it.”

The play’s main character, “Gramps” is reluctant to speak about his war experience in front of his grandson Joey’s class, LaFrancis said.

“He has serious doubts because he doesn’t think anyone cares about a war that happened so long ago, especially kids,” he said. “Is Gramps going to go, or is he not going to go? And is his grandson Joey going to convince him?”

The audience will follow Gramps’s emotional journey with flashbacks to WWII. Both veterans and young people are all encouraged to see it. All proceeds benefit Home With Heroes Foundation, a private nonprofit organization founded by LaFrancis that helps veterans and their loved ones in the Miss Lou. LaFrancis said an anonymous benefactor made a contribution so that Natchez High School Junior ROTC members and active-duty members of the U.S. Coast Guard could see the play for free.

“We want young people to learn and witness the emotion this play will carry out on stage,” LaFrancis said. “There are a lot of emotional parts to this, but there are some funny parts too.”

In addition to the premiere of the play, the performance also marks the release of LaFrancis’s book, “In Their Boots: Voices of WWII,” which includes poetry, first-person accounts and photographs. Hard copies will be available to purchase for $15 each. Autographed copies will also be available.

There will also be a silent auction benefiting the Home With Heroes Foundation, which includes WWII museum tickets and a flag that was flown over the capitol.

“We’ve already started rehearsals,” LaFrancis said. “It’s surreal to see people embracing characters that I put on a page and bringing them to life on a stage. And also just getting it. Getting the character in the way I intended and putting their own characters into it. Devin is an excellent director and producer.”