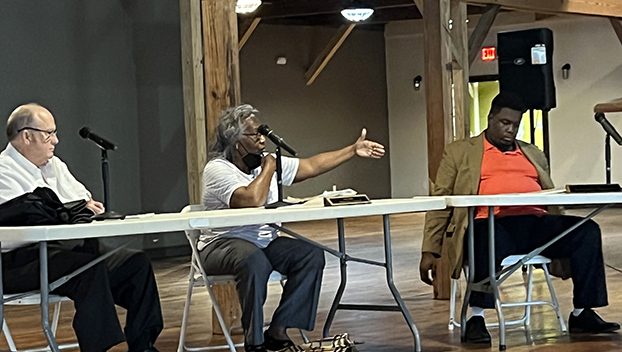 Alderwoman Gloria Lloyd addresses the Ferriday Mayor and Board of Aldermen. (File photo | The Natchez Democrat)

FERRIDAY, La. — A Ferriday alderperson has accused Mayor Rydell Turner of breaking the law by frivolously spending federal COVID-19 relief funds without board approval. However, when the mayor called a special meeting Friday to discuss use of the remaining American Rescue Plan Act funds, only two board members showed up to the meeting.

The special meeting was scheduled for 5 p.m. Friday at Ferriday Town Hall. Alderman Gail Pryor and Elijah “Stepper” Banks were the only two to show up apart from Turner. Gloria Lloyd, Andre Keys, and Brandi Bacon were absent.

The meeting was canceled for lack of a quorum.

“Why would I go to the meeting when you’ve already spent the money?” said Lloyd, who told the town council Tuesday that Turner had broken the law. “Common sense would tell you he’s already spent it, so why call the meeting?”

Turner has not responded to phone calls and messages requesting additional comments for this story. Last week, he said the top priority for the remaining funds is to update sewer lines and to clean up Ferriday streets.

“We have maybe $300,000 left to be used to clean up the town and repair our outdated sewer pumps,” he said.

Turner stated during Tuesday’s meeting that spent COVID relief funds were approved by the board when they approved the town’s budget, but Lloyd disagreed.

“They weren’t included in the budget,” she said. “The board voted Nov. 8 to take the money and put it into an account. We approved the budget in August and we got the money in October. We have not come back and amended the budget.”

She said none of the money should have been spent at all.

Lloyd said the town should have also advertised for bids on the work that was done, which the board did not approve.

“All I want him to do is to do right by the town of Ferriday,” she said. “Not one penny of that money should’ve been spent. You spent part of the money and now you want us to come back and correct your wrong? No, I’m not going to do that.”