King’s effort to ‘defend my name’ deteriorates into shouting match 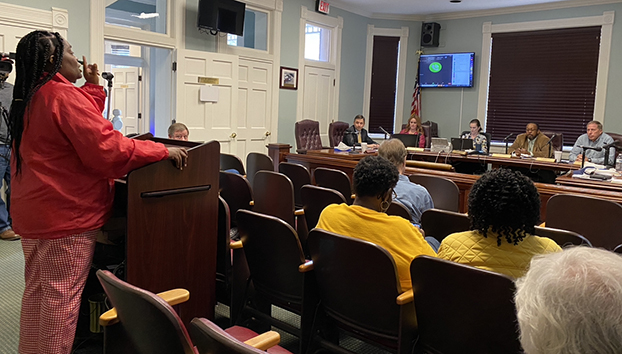 Angie King addresses Adams County Board of Supervisors on Tuesday, saying she needed to defend her name. (Jan Griffey | The Natchez Democrat)

NATCHEZ — Tempers flared and an emotional former county administrator, Angie King, ultimately had to be escorted away from the building where the Adams County Board of Supervisors met on Tuesday morning.

County supervisors voted 3-2 two weeks ago to not renew King’s employment as county administrator. Discussions about King’s job performance happened in executive sessions and away from public scrutiny, as almost all personnel issues are handled in an effort to preserve the privacy of employees.

A group of about seven people, including family members of King, sat through Tuesday’s meeting until its end, when members of the public are invited to speak about concerns to supervisors.

Terri McGruder asked the board to reinstate King as county administrator.

Gray explained without three votes from the five supervisors, King would not be reinstated.

“Each supervisor that voted against the reappointment had a different reason for doing so possibly,” Wilson said. “When Angie King was sitting in this seat right here three years, she told her story, how she came from nothing to the job she had. She fostered lots of children. I told her then in my eyes, she was an American success story because what she did with her life.

“But I got so many emails and I had so many people calling me. If you can’t handle the pressure, you get overwhelmed and you start getting behind,” Wilson said. “I got a lot of phone calls that things weren’t getting done. I love Angie. I think she’s great, but she represents us and I didn’t like the way things were going. I got to many calls and complaints. I didn’t like the way things were going. It involved a lot of money the county was losing.”

Hutchins said the decision to not reappoint King was not a personal one.

“Certain things we cannot discuss with the public, but based on information from previous executive sessions allowed me to come to that conclusion,” Hutchins said. “I did the same thing with Jordan Kaiser and Sessions. It was not based on color. It was not based on anything personal. When a person does not perform, something has to be done when the county is coming down. That’s what you all elected us to do, protect you and the taxpayers’ money. So that was my reason,” she said.

Gray argued and said he did not know why King was fired. He and Hutchins argued back and forth about information given during executive sessions.

New supervisor president Warren Gaines was forced to use his gavel several times during the discussion to try to bring about order to the meeting.

King then spoke to the board and said she had come forward to defend her name.

“I need to defend my name because I just listened to Supervisor Hutchins say I was not successful in my job,” King said.

She accused Hutchins of setting her up by getting a county employee to write an unfavorable letter about her. Hutchins vehemently denied that claim.

The discussion deteriorated into a shouting match and King and some of her supporters were escorted out of the room.