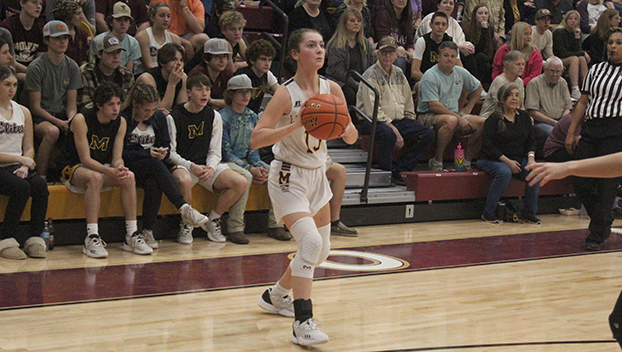 MONTEREY  — Macee Green knocked down the first official bucket in Jack Bairnsfather Gymnasium with a jump shot in the Lady Wolves first possession en route to Monterey’s 59-13 win over Grace Christian Tuesday night. Monterey had some nervous excitement in warmups before the game.

Green said she was pretty nervous before the game but scoring early helped calm the game down. They shot, defended, rebounded and passed well in the first quarter following her opening score.

“It means a lot to score the first bucket. My nerves were gone after that first shot,” Green said. “It felt good.”

Monterey went on a 14-0 run to start the game and closed the first quarter with a 29-5 lead. Fans were ecstatic about the start.

Athletic Director Cary Shively said the new gym could hold about 600 fans while the old gym held at its max 350 spectators. Nearly every inch of the bleachers was filled by the Maroon and Gold faithful and people began to take their seats about an hour before tipoff. Their excited energy carried over into the game.

Monterey never let off the gas in the first half and went to the break up 42-5. A running clock started for the second half and Monterey scored seven points in the third quarter and 10 points in the fourth. Green finished the game with 29 points including five threes.

Addy LaCaze was the most focused player in warmups. She came in shooting with a straight face but eventually worked up a smile the closer they got to the start. LaCaze got things off to a good start by winning the tip. She would finish the game with 16 points

“I wasn’t nervous as much. It is just a game. I love game time,” LaCaze said. “It is exciting to play here. I have been waiting for a long time.”

Monterey has waited a while for the new gym. It was supposed to be finished before basketball season started but delays pushed back the open date. October turned to November and then into December but now it is open for the remainder of the season. LaCaze said it was annoying at first having to wait. Now the gym is here, the players and community are excited.

One thing the girls like about the new facility is the sheer size of the gym compared to the old one. LaCaze said one positive is they don’t have to walk through the other team’s locker room to get to their locker room.

“In the old gym there was the visiting locker room and then ours and you had to go through it. It was kind of awkward,” LaCaze said.

Perhaps the best thing about the new gym is they will finally be able to host a playoff game if they are able to this year. Previously, the Wolves would play those games in Vidalia.

“I’m glad we don’t have to go to Vidalia any more just to play a basketball game,” Green said.

“It might not have been our gym but our fans pretty much follow us everywhere,” LaCaze said. “The fans are really good about showing up. I’m very grateful for that.”