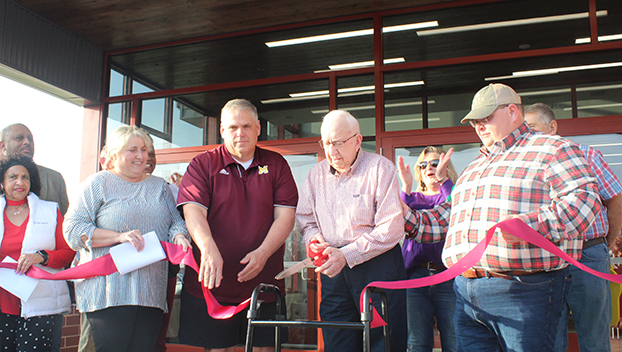 MONTEREY — Nestled against the banks of Black River Lake, the quaint community of Monterey came together to celebrate the past and future with the grand opening of the Jack Bairnsfather gym. A game against Grace Christian was the first game played in the new stadium as people gathered for a ribbon cutting and barbecue from Big D’s before tipoff.

Monterey’s previous gym was built in 1956 and was the home of the Mighty Wolve’s basketball program. Small in stature, the gym was unable to host LHSAA playoff games but was fervent with home support. It was a tough place for visitors to play. The new gym, with additional seating, new lights, new paint and a shiny new court will look to maintain the tradition.

Monterey head coach Jack Bairnsfather was honored with the new gym named in honor of him. He coached the Wolves for 33 years and was a teacher at the school for 41 years. Bairnsfather was inducted into the Louisiana Hall of Fame in 2002 and had a career record of 619-474. He serves as the chairman of Concordia Parish Recreation District No. 2.

“I pretty well know the place. I retired 20 years ago and celebrated my 90th birthday last week. I would do it all over again. Monterey has been my life,” Bairnsfather said. “I had a good career here. It has been my life for a while. My dad (Hartwell M. Bairnsfather) was the first graduate at Monterey in 1911. My mom was a teacher. We have been an all educator family.”

He said the community in Monterey was good. It is a town where everyone knows everyone. People gathered around the front, the lobby and the gym talking and catching up before the games started. Bairnsfather said he has always felt safe in Monterey.

In the stands, you can spot Bairnsfather watching the next generation of Wolves battle it out on the hardwood. He doesn’t miss many games even if the lingering effects of polio try to keep him away.

Something you might find interesting about Bairnsfather was his determination to go to Louisiana State University.

“I would go back and forth to Baton Rouge and home here in Monterey. I didn’t have a car though,” he said. “I would ride with friends and sometimes I would come home with them. Sometimes I would hitchhike to Ferriday from Baton Rouge and catch a ride home. Sunday evenings my brother would take me over to Natchez. I would hitch hike the rest of the way. Back then, I had an LSU bag and it was like a golden ticket.”

Head Coach Eric Richard was relieved to get the gym open. He had been asked when it would be ready over the course of this fall almost daily. Monterey was able to practice three times in the gym before their first game.

Jack Bairnsfather Gymnasium has a meeting room where Richard talks to the team before games or can go over film, it has a new spacious concession stand and a state of the art weight room.

Richard helped Bairnsfather cut the ribbon with a large pair of silver scissors before a crowd of people rushed into the new facility with excitement. Monterey’s team was so excited they began warm up about 40 minutes before tipoff.