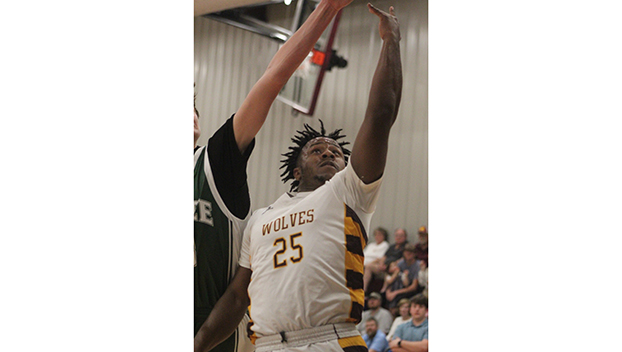 Phillip Atkins goes up to make a layup in Monterey's first game in their new gym. The Mighty Wolves won 76-24 over Grace Christian Tuesday night. (Hunter Cloud | The Natchez Democrat)

MONTEREY — Grace Christian found itself in a 28-4 hole after eight minutes of play as the Monterey Wolves opened their new gym with a vicious attack akin to the wild pack animals. Defense created offense and Monterey senior Nathan Blount said ‘defense is what wins you games” as they won 76-24 over the Warriors Tuesday night.

Monterey forced takeaways to create fastbreak opportunities and scored numerous points in transition. They played up to the moment and opened their new gym with a showing former head coach Jack Bairnsfather, who the gym is named for, would be proud of. He watched from the stands.

It was another Jack who had a special night. Jack Magoun knocked down a wide open three from the right wing to score the boy’s first official bucket in the gym. He finished the game with 17 points. Nathan Blount was right behind him with 13 points and knocked down some big shots in the first quarter to open the gym with a win.

“It was exciting. It has been forever since they announced it was being built,” Blount said. “We didn’t have any nerves before the game, we just came out here and played ball.”

Their first quarter was strong and so was their second quarter performance. Monterey had a 48-11 lead going into the locker room at halftime and kept up momentum. Wolves bench players stepped up in the third quarter and widened the gap to 67-15 and added 11 more points to close out the game 76-24.

Blount said he noticed the new court made the ball feel better when he dribbled and he liked the new goals.

It was a great way to open up the new gym. His teammate Phillip Atkins said he liked how the crowd is bigger in the new gym. It holds twice the capacity of Monterey’s old gym and can serve as a host for playoff games, in previous years they had to play home playoff games at Vidalia’s gym. Atkins has experienced change just like the gym.

“It feels good we are at home now,” Atkins said. “I feel like I have grown. I am playing at my own pace and making the other team play at our pace.”

Big man Brandon Tiffee scored 16 points for Monterey and lanky Talon Blount scored 12 points. They are just a few other options who can be dangerous shooters and help add depth to the team. Monterey’s student section loved how the Wolves played unselfish ball and scored at a fervent pace in the first half.