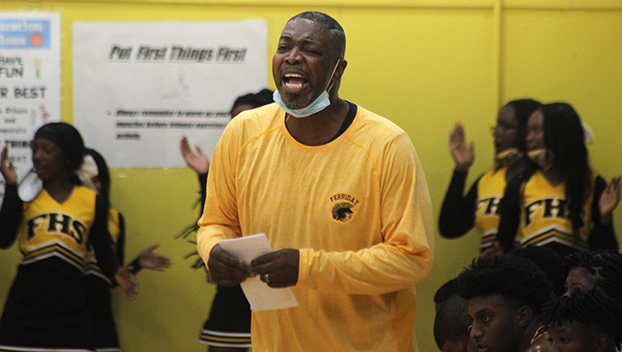 Head Coach Shaun Davis said his team has yet to been able to practice as a full team. They were missing several players against Madison Parish. (Hunter Cloud | The Natchez Democrat)

VIDALIA — Ferriday High School varsity boys’ head basketball coach Shawn Davis had to wonder what to expect from his new group of players last Tuesday night when the Trojans hit the road to take on Concordia Parish and LHSAA District 2-2A rival Vidalia High School.

Especially after finding out just last Friday that four players on the Ferriday Trojans were ruled academically ineligible, including one of their top scorers. And that left Davis having to bring up some players from Ferriday’s junior varsity team and with little time for them to practice for the district opener for both teams.

One of those players who were called up was Markeith Terrell, who nearly had a triple-double with 14 points, 12 rebounds and eight blocked shots while Pamarion Swanson led Ferriday with a game-high 19 points as the Trojans defeated the Vidalia Vikings 57-45.

“Big win for us. That was one of our goals, to get off to a good start in district play,” Davis said. “In a rivalry game, you’re always up for it, no matter who is on the court.”

Vidalia got off to a good start in what turned out to be a back-and-forth first quarter, which ended with the Vikings leading the Trojans 13-12. The next two quarters belonged to Ferriday – the second quarter in particular.

With Swanson, Terrell, Kenyan Millgan, and Sugar Ray Watson leading the way, the Trojans outscored the Vikings 18-8 in the second quarter to take a 30-21 lead into halftime. Even though the third quarter was much more competitive than the second quarter was, Ferriday still managed to outscore Vidalia 17-14 for a 47-35 advantage.
Milligan and Watson finished with eight points apiece. Vidalia was led by Christopher Brooks with 13 points and Louis Jordan added 12 points.

“We had some JV players who had to come up, Markeith in particular. We knew it was going to be pretty good. There was a good crowd at the (Vidalia) gym,” Davis said. “Markeith played 28 minutes. He’s about 6-4, 6-5. He’s replacing our second leading scorer, Tre Jackson, who was averaging 17 points a game.”

Davis said it took a quarter and a half for the new players to get used to things, but once they got into the flow of the game, they found a good rhythm. Vidalia could do little to slow down the Trojans.

“We have General Trass next. We’ve got them at home, also. Hopefully we can go 2-0 in district before next week,” Davis said.

VIDALIA — For much of the last two decades, the Ferriday High School Lady Trojans have dominated the Vidalia High School Lady Vikings in their version of the Concordia Parish rivalry, whether the two teams were in the same district or not.

However, that would not be the case last Tuesday night as the Vidalia Lady Vikings stunned the Ferriday Lady Trojans 40-39 in the LHSAA District 2-2A opener for both teams. No other information on the game was available.