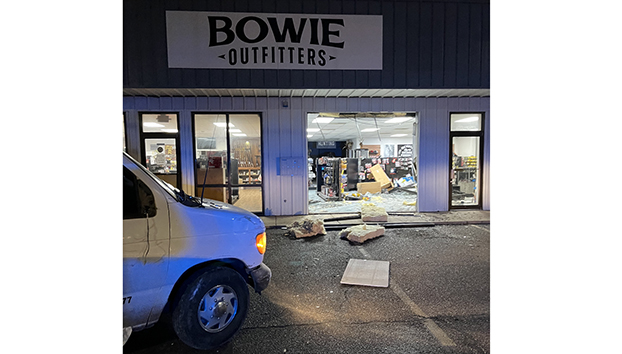 NATCHEZ — The general manager of Bowie Outfitters has nothing but praise for the Natchez Police Department.

John Kammerdeiner said the response time to a crime at the store he manages was less than two minutes from the alarm going off at the store.

“You could not even wish for a better response time from police,” he said.

At about 5:13 a.m. on Saturday, two juveniles who had stolen a van from another Natchez business on Jan. 2, drove that van into the front of Bowie Outfitters, knocking in what was basically a wall of glass.

“Nothing was stolen. I feel blessed that we had nothing taken from the store,” Kammerdeiner said. “We had pretty good damage done to the building, but we didn’t even have that much merchandise damaged. We did lose a day’s income because we had to close for the day for repairs, but I feel we were blessed. I am grateful to the Natchez Police Department for their quick and speedy response time.”

Despite the fact that Bowie Outfitters sells gun and other high value hunting equipment, Kammerdeiner said because of his very visible location, thieves have not targeted the business.

“He called and was so kind. He sent his sympathy. But it’s the times we live in. There are criminals. We were lucky. We are glad they caught the them so quickly.”