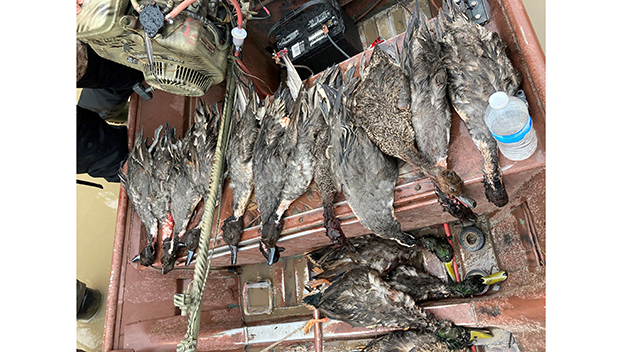 LDWF agents cited Colton H. Nettles, 25, of Woodville, Miss.; Brandon L. Nettles, 37, of Woodville, Miss.; and a 16-year old juvenile for taking over the daily limit of ducks, taking over the daily limit of pintail, and intentional concealment of wildlife. Colton Nettles and Brandon Nettles were also cited for contributing to the delinquency of a juvenile. These are some of the seized ducks in December of 2021. They will appear in a federal district court later this month in an initial appearance. (Courtesy Photo | Louisiana Department of Wildlife and Fisheries)

ALEXANDRIA, La — Duck hunters Brandon Nettles and Colton Nettles, of Woodville, appeared before a federal judge in an initial appearance in the Western District Court of Louisiana Wednesday.

Brandon and Colton were federally charged with one count of taking or attempting to take migratory game birds more than the daily limit and two counts of wanton waste of migratory birds according to the docket.

The Nettles were first cited by the Louisiana Department of Wildlife and Fisheries for alleged migratory bird violations on December 20, 2021 in LaSalle Parish.

The case was referred for federal prosecution by the United States Fish and Wildlife Service in January 2022.