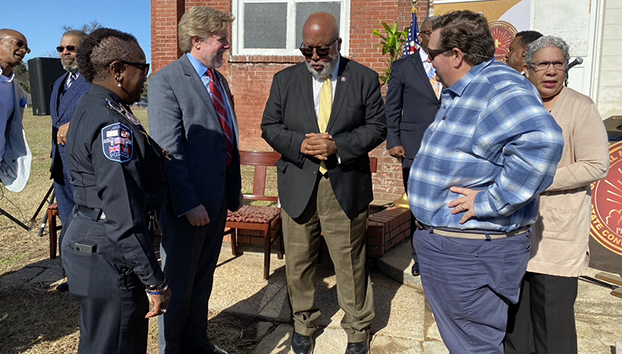 NATCHEZ — U.S. Rep. Bennie Thompson was in Natchez Thursday morning as a $750,000 grant from the Lilly Endowment was officially announced for the benefit of Natchez College.

The money will be used to restore the T.J. Huddleston Memorial Chapel at Mississippi College, which is owned by the General Missionary Baptist State Convention of Mississippi.

The grant in total gives $2.5 million to the Foundation for Mississippi History to help the Mississippi Department of Archives and History in its effort to promote to the public the role of religion in Mississippi history and culture, said Katie Blount, director of the MDAH.

“Sadie V. Thompson School has become a landmark over time, but most don’t know it was built adjacent to a garbage dump. They said, ‘If we are going to build a new school in Natchez for them, we are going to put it over at the garbage dump.’ That’s part of the history that we need to make sure never gets repeated again,” Thompson said.

Blount said, in addition to preservation work at Historic Jefferson College in Natchez, the funds would provide free admission to the Mississippi museums for faith-related groups beginning this summer.

She said the proposal developed to present to Lilly came about after a series of conversations with religious leaders from across the state, including here in Natchez.

That included the Rev. Reginald Buckley, who is president of the Greater Missionary Baptist State Convention of Mississippi.

“He told us about an exciting project here led by the convention that closely connects with our work at nearby Jefferson College, Mississippi’s first institution of higher learning and an MDAH site,” Blount said.

She said through a combination of federal, state, local and private funds, MDAH is restoring buildings at Jefferson College and establishing a museum there that would interpret the history of the region with a focus on cotton, slavery, civil war and reconstruction.

“We envision Jefferson College as a gateway to Natchez, bringing people here and then sending them out to see the placed where history happened, like this place,” Blount said.

Plans at Jefferson College include establishing a historic preservation field school where high school and college students get hands-on learning in preservation trades that are in great demand in the marketplace.

“When we learned from Rev. Buckley that the General Missionary Baptist Convention has committed to restoring Natchez College, where we sit today, we knew that this effort needed to be a part of our Lilly proposal,” Blount said. “While Jefferson College was established to educate the sons of the white elite, Natchez College was founded in the same era to educate Black Mississippians. If we are fully to understand our history, we must tell both of our stories.”

The men and women of the General Missionary Baptist State Convention of Mississippi founded Natchez College in 1884, Buckley said.

“Formed in 1872, the Greater Missionary Baptist State Convention of Mississippi had as its mission, alongside evangelism, a commitment to African American advancement through institutional development,” he said. “Shortly after the civil war ended, newly-freed Black men and women bound together by faith in God were given the mandate to help build a new life of opportunity, a life that in many respects began with education.

“This convention was on the front lines of that mandate, first founding Natchez Seminary in 1877, which later moved to Jackson and became Jackson State University, and then this institution, Natchez College, which served this community and indeed the state of Mississippi until 1989,” Buckley said.

He said pastors, deacons, congregations and laypersons from across the state gave of themselves and their treasure to make this college a special place.

“Now with the help of the Lilly Endowment and the partnership with the Mississippi Department of Archives and History, we will tell the amazing story of our convention and this college in the context of this community,” he said.

Phase 1 of the project will be the restoration of the Huddleston Memorial Chapel.

“Dr. T.J. Huddleston helped to orchestrate a system of health insurance for African Americans and helped to build the first hospital owned and operated by African Americans,” he said. “A former member of the board of trustees for Natchez College, Huddleston helped to pay off over $60,000 in college indebtedness during one of its lean times, which allowed these college doors to remain open and this campus to stay operating.”

Plans of Phase 2 will include the restoration of the women’s dormitory, which when completed will house the vast collection of convention and college archives. It will also serve as a repository of member churches’ histories.

Phase 3 of the Natchez College project will include a café, courtyard and amphitheater, which will be called the Baptist Heritage and Art Center.

“Our goal is for this campus not only to be a place where history is preserved but where history is made,” Buckley said. “A place that adds value and meaning to the life of this community.”

Thompson talked about a once well-known comedian who used the catchphrase, “How sweet it is.”

“When I look at what is happening here today, I have to say, ‘How sweet it is!’ ”

Thompson challenged the Rev. Buckley and others to gather students and send them out to record the recollections of older Natchezians in an effort to preserve history.

“Point them in the right direction and tell them to go find the oldest people in Natchez and just talk to them about what Natchez College meant to them and how it used to be,” Thompson said.