UPDATE and VIDEO: Progress made on Jackson Point Bridge cleanup after December collapse 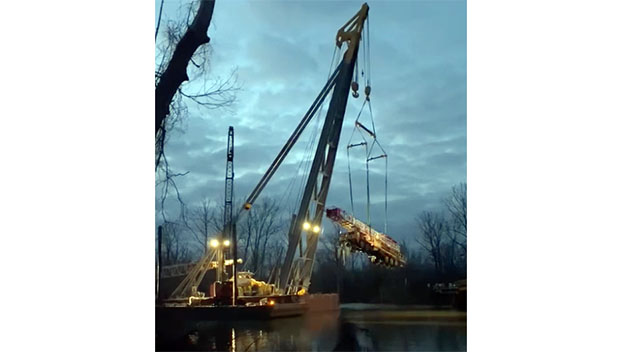 A massive crane on a barge lifts an oil field truck from the wreckage of the collapsed Jackson Point Bridge. Photo courtesy of Adams County Sheriff’s Office.

WOODVILLE — Progress has been made on the cleanup of the Jackson Point Road Bridge in Woodville after the bridge collapsed underneath the weight of an oil field rig driving across it on Dec. 29.

No injuries occurred at the time of the accident. The driver was able to climb out unharmed.

Over the weekend and earlier this week, McKinney Salvage and Heavy Lifting Company’s equipment arrived at the site via the Mississippi River and Buffalo River.

On Sunday evening, a massive crane on a barge lifted the Delta Workover truck from the wreckage and placed it on dry ground. The following Monday, Delta workers were able to make minor repairs to the rig, which had been sitting vertically on the collapsed bridge for three weeks, and drive it away on its own power.

Watch a video of the rig removal below.

“They’re in the process of getting supplies in to remove that section,” said Adams County EMA Director Robert Bradford, who assisted Wilkinson County through the evacuation and cleanup process. “They haven’t made predictions on the cost of the repair or how it’s going to be paid for. … It could be a year or more before it’s passable (by road) again.”

Thankfully, Bradford said houses that have been cut off from road access are only secondary vacation homes to the 25 residents from that area, who can now only reach their property by small off-road vehicles or boats.

The Jackson Point Road Bridge is the only access point to Adams County territory on the opposite side of the Buffalo River.

District 1 Supervisor Wes Middleton said during supervisor’s meetings that he couldn’t make his rounds to those parts of his district to let the board know of any issues that would require the Adams County Supervisor’s attention.

“The concern for me is people in Adams County who own property over there not being able to access their property,” Middleton said. “It’s only a couple of times a year county will go over there and do some maintenance, so that is my big and really my only concern is the property owners.”