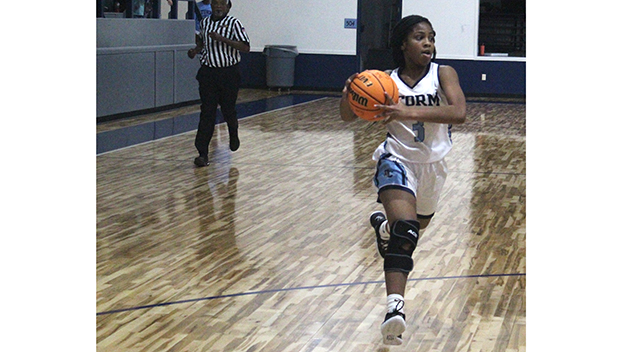 FERRIDAY — Just twenty-four hours after disposing of the Tensas High School Lady Panthers 72-25 to remain undefeated in LHSAA District 4-1A, the Delta Charter School Lady Storm faced off with a team in a much higher classification in Peabody Magnet High School.

And while Peabody Magnet out of Alexandria, La., is one of the top teams in the state in Class 4A, Delta Charter was not at all intimidated by the Lady Warhorses. In fact, the Lady Storm held their own despite suffering a 38-36 setback last Wednesday night.

Lady Storm head coach Ronald Ellis said free throws were the difference in the outcome of this game.

“They made theirs late. We missed out. We missed a few late that could have won us the game,” Ellis said. “We missed a nice amount late. They’re one of the (best) teams in 4A.”

Delta Charter sophomore guard Roniya Ellis was the only player for the Lady Storm to finish in double figures as finished with a game-high 26 points. The next leading scorer for the home team was Chyann Lee with six points. Allison Atwood had three points and Mikayla Matthews had one point.

“She’s a good player. She came out and hit four or five 3s on them,” coach Ellis said about Roniya Ellis’s performance.

Peabody Magnet jumped out to a 14-9 lead on Delta Charter at the end of the first quarter, but the Lady Storm responded by outscoring the Lady Warhorses 11-8 in the second quarter to go into halftime down just two points, 22-20.

The third quarter proved to be tough sledding for the Lady Storm after the Lady Warhorses switched their defense to make it difficult for Delta Charter to get shots off. Peabody managed to outscore Delta Charter 7-6 in the quarter for a 29-26 lead.

Even in a loss, Ellis said he was pleased with the effort the Lady Storm played with against a team three classifications up.

“We lost to a 4A team by only two points. That gives the girls some confidence that they can play with anyone,” Ellis said. “They’re averaging more than that (38 points). And they’ve played some good teams. I was pleased with the defense that we played. I think we held them to their lowest total this season.”

The Lady Storm (12-9, 3-0) returned to District 4-1A play at 6 p.m. Friday when they traveled to nearby Jonesville, La. to take on the Block High School Lady Bears.