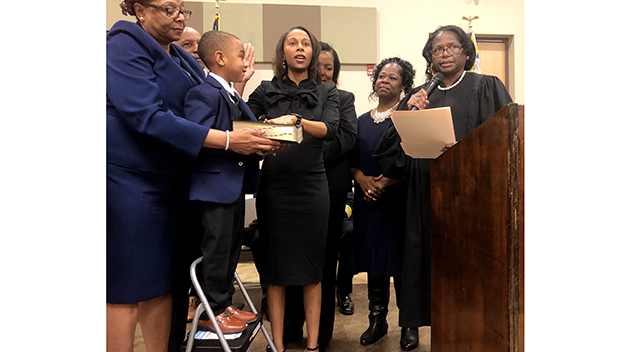 District Attorney Shameca Collins is sworn in after her election in 2019. (Ben Hillyer / The Natchez Democrat)

NATCHEZ — Sixth Circuit Court District Attorney Shameca S. Collins has announced she is running for re-election to her position.

Collins defeated Ronnie Harper for the district attorney position in the 2019 election.

“I have served in this position for the past four years, and I have stayed committed to ensuring that justice is served in our community in a fair and progressive way,” Collins said in a press release announcing her candidacy.

“During my first term, I have fulfilled many of the promises that I made when I first ran for this office. During my first campaign, I told you all that I believed that my duty is not to convict, but to see that justice is done. I also told you that I am tough on crime, but being tough on crime doesn’t mean that we should destroy lives. When crimes are committed, we should be hard on criminals; but we should also work to rehabilitate our citizens that have lost their way,” Collins said.

She said during her time in office she has established procedures to punish those who commit crimes, and implemented a number of “progressive and innovative” programs to address the root causes of crimes.

Collins said those procedures include:

• Working closely with the US Attorney Task Force to prosecute criminal firearm offenders.
• Making the prosecution of violent crime an office priority.
• Modernizing the computer system in the District Attorney’s office to track prosecutions.
• Establishing pretrial intervention and extending drug court to all counties in District 6, thereby freeing resources to focus on violent criminals.
• Making Arrest Tracking Numbers mandatory so that background checks can be correct.
• Eliminating the option of plea bargains in nearly all murder cases.
• Trying and winning murder cases so that offenders can receive maximum sentences.
• Aggressively forcing defendants to pay court-ordered restitution to local citizens.
• Making it a priority to appoint diverse individuals to key positions in the District Attorney’s office.
• Offering annual free training for law enforcement.
• Ensuring that all individuals are treated fairly and without discrimination, while being attentive to victims and their needs.
“I’m not a stranger to the citizens of District 6. Many of you know me personally. You’re my neighbors, my fellow citizens, and I have always worked to hold myself accountable to you. Many of you call my office, or you stop me at the store, or on the street, and I am always willing to talk to you and listen to your concerns,” Collins said. “It’s important to me that I know the people that I’m representing, just as it’s important that you all know me. It’s necessary that the District Attorney be accessible and transparent to the voters of District 6, and I promise that I will continue to be accessible if you re-elect me.

“I’m asking you for your support, so it’s only fair that I tell you why I’m running for re-election. I’m running to be re-elected to the Office of District Attorney of the 6th Circuit District because I know that justice and fairness are extremely important to all of our citizens,” she said. “Each case should be judged on its merits, no matter who it involves. We should all be able to tell our children that when they grow up, they will be treated fairly by the law, no matter their race, color, religion or gender. This is what I’m working for. This is why I’m running.