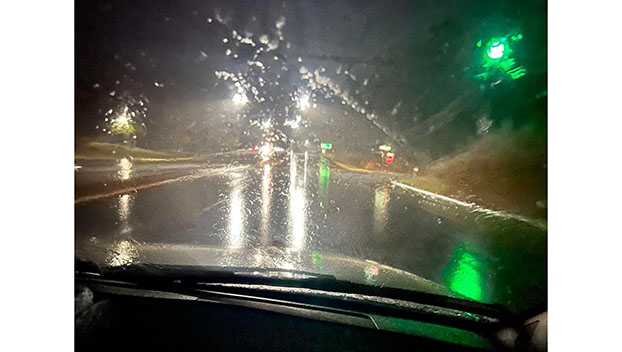 Linda Decker Holley submitted this photo of the wet, reflective surface of U.S. 61 over the weekend. The combination of rain after dark made it difficult to see the lanes.

NATCHEZ — As seen last weekend, several people have taken to social media to describe how traffic lines on the recently repaved U.S. 61 are nearly impossible to see at night when it rains.

The good news is Mississippi Department of Transportation officials said these lines are only temporary while construction is still ongoing.

The bad news — Natchez may not have permanent reflective paint and reflectors on the road until April or May, said Albert White, district engineer with MDOT.

“We are going to try to do some restriping in some areas in the next week or so,” White said. “Some of it, you can’t even see at all and those are the areas we will be working on, but it’s going to be temporary still.”

White said all of the stripes have reflective material in them, but the permanent stripes are thicker and easier to see on wet pavement after dark.

“We’re hoping to get done faster, but it may be April before it’s finished,” he said. “That also depends on the weather we have. If it gets too cold, you can’t stripe because it won’t bind to the asphalt.”

Despite the number of complaints, Interim Natchez Police Chief Cal Green said she had not noticed an increase in traffic accidents as a result of the mirror-like road surface without reflective paint.

“We had two traffic accidents over the weekend, one on John R. Junkin and one on Seargent Prentiss, and neither has stated it was because they couldn’t see the road,” she said.