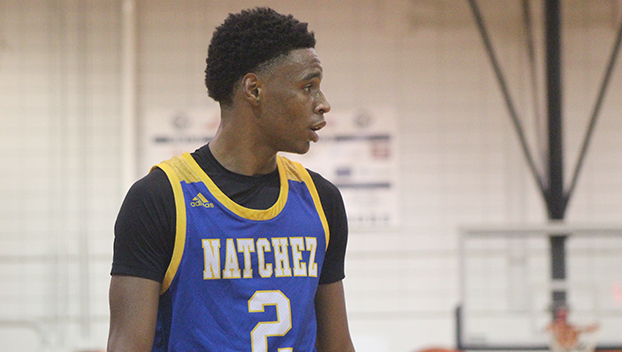 Natchez High got off to a slow start offensively and trailed West Jones 11-7 by the end of the first quarter. It took a little while for the Bulldogs to get going offensively, but their defense kept them in the game long enough for them to finally take the lead.

“We missed a couple of easy shots at the beginning. They had the momentum at the beginning of the game,” Bulldogs head coach David Haywood said. “Early on we were stalling too much. We put them on the free-throw line too much as well. They shot a lot of free throws.”

The Bulldogs were able to outscore the Mustangs 10-7 in the second quarter to go into halftime down by just one point, 18-17. The third quarter proved to be the difference in the outcome of this pivotal region game as Natchez High put up 15 points while holding West Jones to just 11 points for a 32-29 advantage.

Haywood said his team’s consistent defensive effort was what helped the Bulldogs overcome their slow start offensively in the first half. It’s what also allowed them to take control of the game in the second half — especially the third quarter.

While the Mustangs put up 23 points in the fourth quarter, the Bulldogs put up the same amount of points to keep the home team at arm’s length. Natchez High led by eight points with nearly two minutes to go before West Jones tried to make one last charge.

“They made a few shots. With about 40 seconds left, they were pressing and we got it in. Daylan (Haywood) went up the court and then back some and he made a floater with 20 seconds left to put us up five,” coach Haywood said. “We knew after that that we had to play defense and get some rebounds.”

Natchez High improved to 15-7 overall and 3-1 in Region 5-5A. The win put the Bulldogs in a first-place tie with Florence High School in the region standings. Those two teams played each other at 7:30 p.m. Tuesday at Florence High School. Haywood discussed the importance of this game.

“We’re No. 1 in district right now. If we take care these two games, we’ll be regular season (Region 5-5A) champs and the No. 1 seed in the (region) tournament. They’re 3-1 and we’re 3-1, but we’ve already beat them. We’ve got to go in focused,” Haywood said. “They have a chance to do something that hasn’t been done in a long time at Natchez High for varsity boys’ basketball.”

After the game at Florence, Natchez High plays host to Brookhaven High School at 7:30 p.m. Friday.

Natchez High just could not get out of the blocks in the first quarter and the Lady Bulldogs found themselves in far too big of a deficit to overcome against one of the top teams in all of Class 5A.

The Lady Bulldogs scored their only point of the first quarter at the free-throw line and were quickly down 11-1 at the end of the first quarter. Natchez High played better over the next two quarters, but was still outscored by West Jones (20-2, 3-0) 10-8 in the second quarter and 14-7 in the third quarter to trail 35-16.

The fourth quarter was similar to the first quarter as the Lady Mustangs outscored the Lady Bulldogs 10-2.

Olivia Davis led the Lady Bulldogs with six points and Jailyah Wright chipped in with five points. They next played at Florence High School in a Region 5-5A game at 6 p.m. Tuesday.