VIDALIA, La. — A Lake Providence man is in Concordia Parish Sheriff’s Office custody after investigators say he groomed what he thought was a minor and traveled to Vidalia to meet up with them.

CPSO Cyber Crime Unit began investigating Kendrick D. Brown, 41, of Lake Providence on Jan. 9 when he began communicating online with what he believed to be a minor. 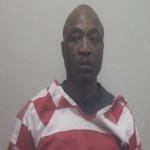 Over the course of two weeks, he reportedly engaged in sexually explicit conversations, during which he expressed his desire to have a sexual relationship that had to be kept secret.

In addition, he transmitted lewd photos of himself and solicited the same in return.

On Saturday, Brown made plans to meet up with the child believing the child’s mother was at work. He reportedly traveled from Lake Providence to do so and met CPSO detectives upon his arrival. He was then taken into custody without incident and has been charged with indecent behavior with juveniles, computer-aided solicitation of a minor, attempted carnal knowledge of a juvenile and possession of a schedule I controlled substance.

“An incident such as this could easily involve an actual child, who could be abducted or sexually abused,” he stated in a news release. “CPSO remains committed to proactively seeking out those who wish to harm or exploit children.”

All persons arrested are presumed innocent until proven guilty, the sheriff’s office states.