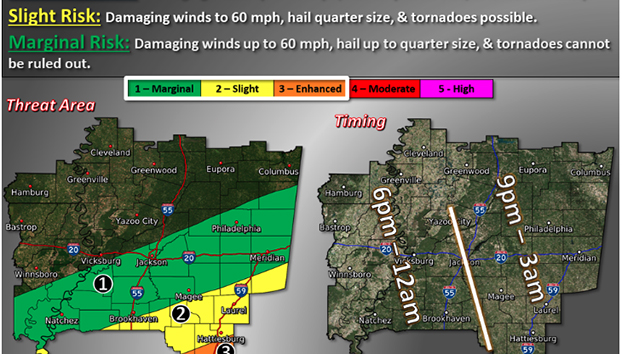 NATCHEZ — The Miss-Lou is included in an area under a wind advisory issued by the National Weather Services, beginning at 3 p.m. today and continuing until 6 a.m. on Wednesday.

In addition, Catahoula and Concordia parishes in Louisiana and Claiborne, Copiah, Simpson, Jefferson, Adams, Franklin and Lincoln counties in Mississippi area at marginal risk for severe thunderstorms and an elevated risk for flooding today and tonight, according to the forecast issued by the National Weather Service in Jackson.

According to the forecast, gusty winds could blow around unsecured objects, tree limbs could be blown down and some areas could lose power as a result.

Isolated sever thunderstorms are possible the remainder of today and tonight. Some thunderstorms could produce damaging wind gusts and hail. A tornado cannot be ruled out, according to the weather service.

Showers are expected to begin here at about noon, then a chance of showers and thunderstorms between noon and 2 p.m. Showers and possibly a thunderstorm after 2 p.m. today. Some storms could produce heavy rainfall. High temperature today should be near 64 degrees. Chance of precipitation is 80 percent.

Tonight showers and thunderstorms are expected before 1 a.m., then a slight chance of rain between 1 and 4 a.m. on Wednesday. Low around 41. Chance of precipitation tonight is 100 percent with new rainfall amounts between 1 and 2 inches.