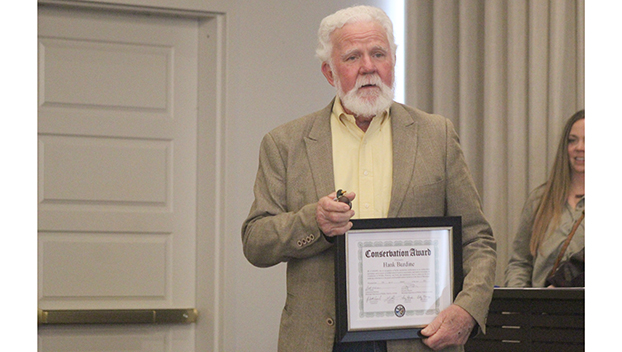 Hank Burdine holds a miniature mallard duck decoy as he expresses his gratitude for receiving the Conservationist award. Burdine is from the Delta and has worked to create duck habitat over the years. He asked people to continue to work in conservation for the future. (Hunter Cloud | The Daily Leader)

CLEVELAND — Longtime conservationist Hank Burdine was recognized by the Mississippi Department of Wildlife, Fisheries and Parks with a conservation award. Commissioner Scott Coopwood handed him the award at the MDWFP Commission meeting Wednesday morning.

Burdine is a resident of Chatham and has spent the majority of his life in the Mississippi delta. He has served on the Mississippi Levee Board and is a writer. First and foremost, he is a hunter who has dedicated his life to conservation.

Commissioner William “Billy” Mounger II said he recently met Burdine but were both able to go to Idaho to pay tribute to a dear friend Chris Hughes by dedicating a duck hole. Hughes was on the Delta Waterfowl board with Mounger and Burdine was right along with them in working to improve the state for ducks.

“Hank is a great conservationist,” Mounger said. “He has done great things for the state.”

He tried giving Burdine a little mallard duck decoy from a trip they had gone on to New Orleans for the premiere of Wings over Water. The film follows a Sandhill Crane, a Yellow-Warbler and a Northern Pintail from the prairie Pothole region to their migration routes.

Burdine was speechless at first. He said it was quite an honor before telling a story about how he took Andrew Newman with Boundless Food Network on a duck hunt in the Delta.

“He asked me one time how long I had been hunting, five or ten years. I told him I started hunting 50 years ago,” Burdine said. “I’m choking up about this award. The best conservationists are hunters. Those who have land and can continue the tradition of what we have here especially in the delta. Create habitat, plant trees and do what we can for the wildlife.”

A good omen of the day was outside the Cotton House Hotel in Cleveland. Burdine got out of his truck and pulled off his hat to check his hair when he noticed some ducks flying in the reflection of his hood.

“They were gadwalls I think, about six or seven of them,” he said. “Keep up the great work. I will continue to keep the habitat going for our children and grandchildren and those yet to come.”