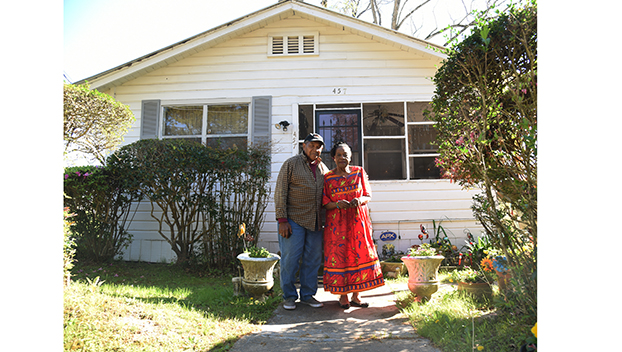 NATCHEZ — Last October, Louis Williams and his wife, Rosie Lee, were watching rain drip through the ceiling of his 60-something-year-old house.

But after applying through Special Needs Assistance Program, the couple has been living under a new metal roof for one month. The program saved the Williams’ $4,000 in repair costs and many headaches, they said.

The main damage was over the bathroom and one other room toward the back of the house.

“We were having to put a cup up there to catch the water,” Rosie Lee said.

Louis said once their application was processed, a crew came around 10 a.m. on a Thursday morning and were finished replacing the roof the same day.

The couple found out about the program through a community meeting.

They both retired due to age, but at different times. Now they live on a fixed income.

Rosie Lee, 85, worked in a dry goods store for several years before she began working in school cafeterias. She worked 25 more years until she had surgery, which ultimately forced her to retire.

Rosie Lee said mopping the floors every day got much harder after dealing with a benign tumor.

“It was a little bit too much,” she said.

Louis, 87, spent most of his working years split between factories. He worked 16 years with Diamond International before the doors closed, then at Smith Printing for 15 years.

“When you get up in age, that arthritis … it gets you,” Louis said.

The City of Natchez partnered with local banks to offer the Special Needs Assistance Program to qualifying homeowners who need improvements to their residences.

The program helps repair health and safety issues on houses including replacing multiple types of roofs, electrical and plumbing problems as well as installing gas heaters while replacing open-flame heaters.

All 14 applications for consideration in the last funding cycle were approved, providing more than $68,000 in assistance. For the past five years, the city has helped provide nearly $470,000 in repairs for 97 residents who could not afford the repairs on their own. The City of Natchez has partners with Concordia Bank & Trust and Home Bank.

The SNAP program is sponsored through the Federal Home Loan Bank of Dallas and is made available to member banks in Mississippi, Louisiana and other states.

“I wanted in, no doubt about it, because it lasts so long,” Rosie Lee said.

If the roof sees normal use, it should last the Williams a few more decades.