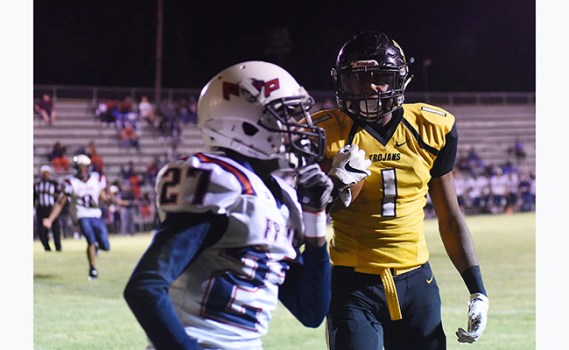 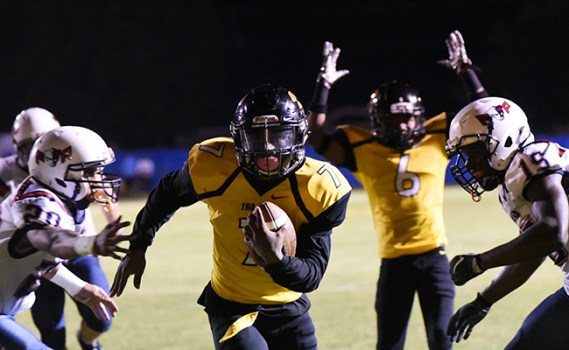 Ferriday High’s Jerrius Scott darts into the end zone for one of his two rushing scores Friday during an LHSAA game against Franklin Parish. (Nicole Hester | The Natchez Democrat)

The Class 2A Trojans will be turning a few more heads after Friday night.

Ferriday capitalized on its speed offensively and tenacity on defense as it routed Class 4A Franklin Parish 58-0.

“It’s huge. Being a smaller school and going and competing against bigger schools and coming out with a win,” FHS coach Stanley Smith said.

The game was delayed approximately 80 minutes after a transformer blew out midway through the second quarter with Ferriday leading 6-0.

“It took us some motivation to get going,” Smith said. “We put a challenge on them, and they came out and accepted the challenge and finished the game.”

The Trojans then dominated from that point on.

Ferriday (2-0) blocked two punts, recovering one for a touchdown, and intercepted a pass defensively in holding the Patriots (1-1) to 133 total yards. Offensively, FHS proved equally effective with five scoring plays 20-plus yards.

“You want to be able to execute in all three phases of the game,” Smith said. “We’re not taking any downs off. We want to finish, and we want to play hard. That’s what we did tonight.”

“We were there last year, and things and situations happened, and we are here now. We are putting everything we have into these guys, and we are excited to be here,” Smith said.

Kobe Dillon threw four touchdown passes, with two going to Jamien Green and one each to Dantrieze Scott and Byron Milligan. Milligan added a second receiving touchdown from Don Poole late in the fourth quarter.

Jerrius Scott had scoring runs of 5 and 80 yards, and Henry Thomas recovered a blocked punt in the end zone for a score.

The Trojans totaled 452 yards for the game, but did commit 13 penalties for 125 yards.

Ferriday will attempt to keep the momentum going next week at LaGrange.

“We have a lot to clean up. I’m not happy with the penalties,” Smith said. “We have to go to the film room and clean that up. Hopefully, we can come back in the next few weeks and be penalty free.” 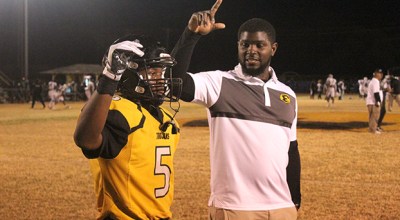